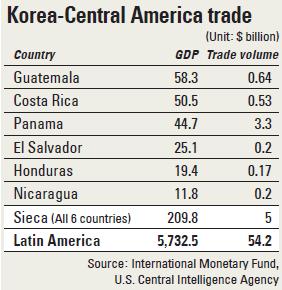 Korea began negotiations over a new free-trade pact with six countries in Central America in an effort to find new market for Korea’s cars, electronic devices and textiles.

It is the first time Sieca has negotiated a free-trade agreement with an Asian country. If the FTA succeeds, Korean products will gain a competitive edge in those markets compared to Chinese and Japanese products.

The Park Geun-hye administration hopes to complete the FTA as soon as possible, as it worries that competition is rising from Chinese manufacturers, who are moving up the production chain.

According to the Ministry of Trade, Industry and Energy Friday, Trade Minister Yoon Sang-jick held the first negotiating session with his counterparts from the six countries in Houston, Texas, on Thursday afternoon.

“With a Korea-Central America FTA, Korea would like to support the six countries in continuing economic and infrastructure development,” Yoon said at the negotiating session. “I hope Korean companies actively participate in the process so that the Korea-Central America FTA becomes a new model of a free-trade pact that creates a win-win situation for both sides’ economic development.” Yoon said the two sides should also discuss ways to enhance the investment environment for Korean companies in basic infrastructure development projects.

The Sieca group is the fifth largest economy in Central and South America, following Brazil, Argentina, Colombia and Chile. The group’s total gross domestic product was about $209.8 billion last year.

Although the group’s total trade with Korea is small - about $5 billion last year - the amount almost doubled over the past decade. Some 200 Korean companies of varying sizes have opened production lines in the Sieca nations and employ nearly 150,000 local people.

Trade with Sieca countries has plenty of potential, said a report released Friday from the Korea Trade-Investment Promotion Agency (Kotra). The Kotra report emphasized that Korean automobiles, auto parts, mobile devices, medical equipment, medicine, construction materials and processed food products are expected to be the largest beneficiaries of the new FTA because the middle class population is expected to grow as the Central American economies develop.

Automobiles and parts are under tariffs that average 20 percent in most Sieca countries. Other products like mobile phones have tariffs from 13 to 20 percent, and construction materials like steel and metal plates have tariffs up to 15 percent.

However, the Kotra report also emphasized that the FTA will require Korean manufacturers to enhance their products and service quality as Chinese products are already sold at a much cheaper price, and four out of six Sieca members have FTAs with the United States.