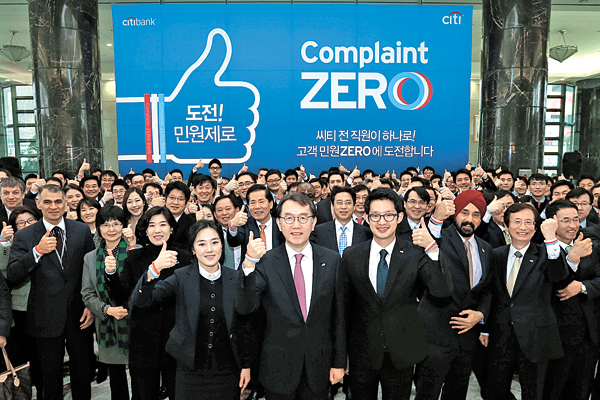 Last October, the bank welcomed its new CEO, Park Jin-Hei - its first leadership change in 14 years. During a discussion of goals and hopes for 2015, he ambitiously declared that Citibank would strive to eliminate all complaints.

Working toward that goal starts with a simple reminder for employees. Recently, Citibank employees started wearing wristbands during work hours. The so-called ‘Complaint ZERO’ Band is supposed to help them keep in mind the new company motto.

The red, white and blue colors on the band represent passion, honesty and trust, which are all virtues employees strive to embody.

In addition, there are other measures being taken to enhance customer satisfaction. For example, employees can access educational videos so they can learn to better communicate with clients who register a complaint.

Structural problems are also being solved. If certain complaints are reported repeatedly, the company tries to find the root of the problem and fix flaws in corporate management.

As a result of the moves, the number of complaints filed has decreased significantly. Complaints plummeted by 81 percent in the first quarter of this year compared to last year’s Q1.

Corporate performance has also improved. In the first quarter of this year, the bank recorded growth of 206.5 percent, which led to net profit of over 110 billion won ($98.5 million).

Return on assets increased by 0.58 percent points to 0.85 percent, which is well above the average return on the assets of banks in Korea, 0.40 percent.

Furthermore, Citibank’s capital adequacy ratio hit 16.61 percent, which is also far above the average for banks in Korea at 13.89 percent.

In bringing about all these changes, Park emphasized that employees should continue to serve clients passionately and earnestly.

“Working toward the goal of zero complaints should be an active move taken by employees,” he said.

“Once achieved, both clients and employees will find satisfaction.”