Bartender shows off skills at BATW

Bartender shows off skills at BATW 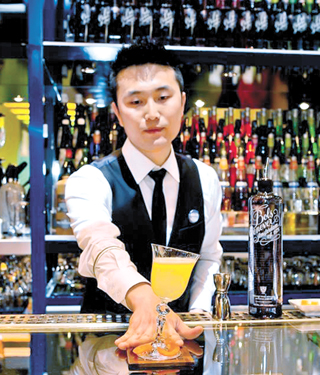 Lee Seong-ha, 34, is currently third among roughly 4,000 competitors at the ongoing Bols Around the World (BATW), a major international bartending competition that ends this month.

The BATW gives 12 missions to participants over 12 weeks. Following each mission, the contestants are judged on the results and are ranked based on the scores they have accumulated so far.

The contests are conducted in 83 countries. Lee is currently first in the United States competition and third overall.

First-place winners in each region qualify to compete in the Master’s Forum in Amsterdam this year.

Even though Lee is not competing in his home country, his popularity is gaining momentum here. He created new cocktails using traditional Korean alcohol and also won the BATW Asia-Pacific competition in 2013.

But Lee wanted to be recognized as the best bartender in the United States, where the cocktail originated. So he left Korea.

“Bartending is an ever-lasting challenge,” he said. “In the bar where I’m working in Las Vegas, the whole menu changes every three months. Making 40 to 50 cocktails every year, I can learn about new ingredients.”

Lee managed to gain the O-1 Visa, permitting him to work in the United States. The visa is given to individuals who have extraordinary skill in science, arts, sports and education. Lee’s performance in many competitions was acknowledged for the visa.

“When I had the visa interview, a consular representative seemed surprised that someone wanted to receive the O-1 Visa through his prowess as a bartender,” he said.

Lee said his family was a big motivation for his success.

In 2005, a bartender at a bar Lee often visited suggested he try bartending. The computer science major decided to give it a go.

But when Lee began his career as a bartender, he faced strong opposition from his family.

“My father asked me ‘how are you going to make a living by selling water?’?” he said. “So we didn’t talk to each other for years.”

But the disapproval gave Lee more motivation. He began to study mixology - the art of making cocktails - because he believed if he could not be acknowledged by his family, no one would recognize him as a good bartender.