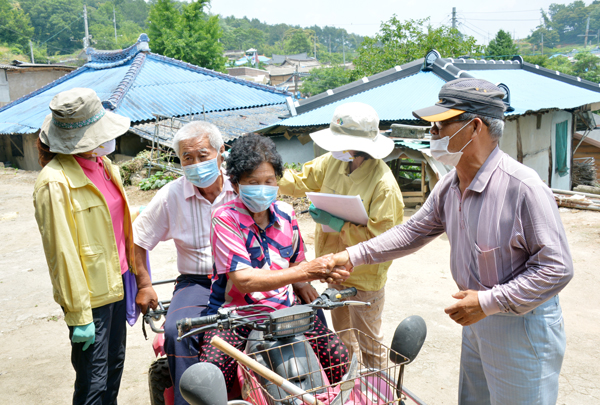 Residents of Jangdeok Village in Sunchang County, North Jeolla, greet each other Friday while two health workers take their temperatures. The villagers have been quarantined for two weeks at home after a resident of the village was confirmed for MERS earlier this month.[NEWSIS]

Jangdeok Village in Sunchang County, North Jeolla, opened to the outside world on Friday. It has been completely sealed off after a resident infected with Middle East respiratory syndrome (MERS) was found to have come into contact with her neighbors.

Patient No. 51, a 72-year-old resident of Jangdeok Village, was infected when she stayed in the same ward with Patient No. 1 at Pyeongtaek St. Mary’s Hospital in Gyeonggi. She returned home while she was supposed to be quarantined. She was confirmed for MERS on June 6 and died on June 12.

More than 100 residents of the town, who had to stay in their cordoned off homes for the past two weeks, came out, and quarantine workers who blocked the village’s entrance removed the barricades.

“We can finally go out,” the village head said through a loudspeaker at 6:30 Friday morning.

The MERS outbreak appears to be subsiding, with a single newly confirmed MERS case on Friday, and one additional fatality. And many people put into quarantine at the outbreak’s height are getting their freedom.

Jangdeok villagers greeted neighbors they hadn’t seen for two weeks and headed to rice paddies and farming fields. Some of them were still wearing masks. Eleven students in the town went back to school.

“It feels great to go out and work in the fields. It’s been like being locked up in a prison,” said local resident Park Jin-soon, 77. “I’ve looked around my garlic field, and some garlic plants have overgrown and others withered because no one took care of them.”

Another local, Hwang Bok-nim, 70, said, “It’s been awful because I couldn’t go to health care centers or hospitals to treat pain in my back and knee, and now I can go to the hospital and grow vegetables again.”

Though the quarantine ended, some are worrying about the aftermath.

“Sunchang has been famous for clean and fresh agricultural products, and I’m not sure how people will think about it now,” said a 67-year-old man named Kim. “I’m also worried if no one comes to the town to help during the busy farming seasons.”

Since some MERS patients in Korea have exhibited symptoms beyond the two-week latency period, local health authorities decided to maintain a tent at the entrance of the town for five days with staff to monitor if any villagers show symptoms.

With the waning number of newly reported MERS cases, the Ministry of Health and Welfare said Friday that they are assuming the outbreak is lulling, though it is keeping an eye on three hospitals that could possibly become new bases for MERS spread.

The health authority Friday announced one more new MERS patient, a 62-year-old man who took care of his wife at Samsung Medical Center’s cancer ward from May 25 to June 5. He began to exhibit symptoms on June 12 and had a fever on June 18, and he reported to a local health care center.

He was not under quarantine and he is believed to have contracted MERS from a third-generation patient, possibly Patient No. 137, an emergency room aide. The health authority is doing epidemiological studies.

Currently, there are 166 confirmed MERS cases in Korea. No new patients were infected at Samsung Emergency Center for two days, signaling that the spread from Patient No. 14, one of Korea’s two “super-spreaders,” has ended.

“We see the outbreak has taken a downturn,” said Kwon Jun-uk, a Health Ministry official. “But I believe we still need to monitor some hospitals to prevent further spread and confirmed patients.”

Kyung Hee University Hospital is where Patient No. 165 is hospitalized. Epidemiological conclusions on how he was infected were not disclosed on Thursday, but the ministry suspects he was infected by Patient No. 76, who died on June 10, in the hospital’s dialysis center on June 6. Patient No. 16 had dialysis every two to three days until June 13. The hospital made an apology on Friday and said that they are not accepting any new patients.

Patient No. 163 is a nurse at Asan Chungmu Hospital. About 10 of her fellow nurses are showing suspected MERS symptoms or tested positive on initial tests. None of them were confirmed for MERS as of Friday. Asan Chungmu is where Patient No. 119 was once treated from June 5 to 9.

Gangan Hospital is where Patient No. 143, who was infected in Daejeon by Patient No. 16, was treated from June 6, and he is known to have had contact with a number of people.

Out of 5,930 people currently under quarantine, 1,313 people came into contact with MERS patients at the three hospitals.

The health authority also added 93 new “safe hospitals,” where people who show suspected MERS symptoms are completely separated from other patients. There are currently 251 safe hospitals nationwide, excluding three hospitals that were taken off the list as they were not adequate.

The Ministry of National Defense announced on Friday that it will dispatch more of its medical personnel for preventive measures.

“Since we’ve found that medical workers at private hospitals are exhausted, we decided to deploy military medical staff to local health care centers,” said an official of the Defense Ministry.

About 300 military medical personnel, including doctors, nurses and emergency technicians, are planned to be dispatched. The first will be 11 nurses who will be sent to Asan Chungmu Hospital.

“Currently, 24 of them are working at Dae Cheong Hospital in Daejeon,” said the official. “We will talk to Health Ministry to learn the exact needs of our medical staff members.”

“Given the seriousness of the situation, the government should have disclosed all information earlier,” said Hwang at a session at the National Assembly on Friday.

“As newly appointed prime minister, I’d like to give my apology that the health authority’s measures in the initial stage were not enough to protect people,” Hwang added.

Also, Jay Y. Lee, vice chairman of Samsung Electronics and heir apparent of the Samsung Group, paid a visit to Samsung Medical Center on Thursday night, which became a base for the spread, infecting about 80 people. He promised to do his best to prevent any further spread of the disease.

“I’m sorry that MERS spread at Samsung Medical Center,” Lee said. “We will do our best to deal with the situation.”