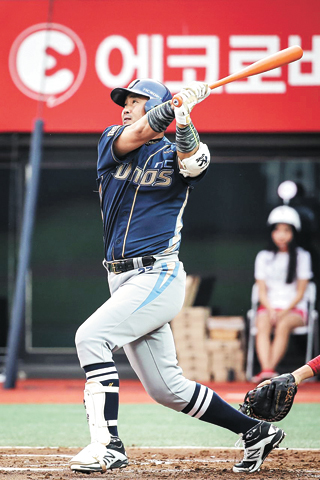 NC Dinos slugger Lee Ho-joon, who is in his 22nd year in the Korea Baseball Organization (KBO), has a new nickname: Hobuji. It combines his first name (Ho-joon) and abuji, which means father in Korean.

The new nickname means this 39-year-old infielder is a father figure to the many young players on the roster of the third-year team.

The Gwangju-born player is the second in RBIs after teammate Eric Thames. Both are chasing the season record of 144 RBIs set by Lee Seung-yuop of the Samsung Lions in 2003.

On Thursday, Lee, the 2004 RBI champion, became the eighth player in KBO history to reach 300 career home runs with a two-run shot against the KT Wiz in Suwon, Gyeonggi.

“It felt like there was something in the pit of my stomach,” he said of the slump leading up to the 300th home run. “Mentally, I was a bit shaken because of the record.”

After graduating from Gwangju Jeil High School, Lee joined the Haitai Tigers (now the KIA Tigers) as a pitcher in 1994. In his debut year, his 10.22 ERA in eight appearances was enough to convince the team to put a bat in his hands. In 1998, Lee finished the season with a .303 average and 19 home runs.

After being traded to the SK Wyverns in 2000, he played a pivotal role in the Incheon-based club’s three Korean Series titles.

In the baseball community, fans jokingly say, “Pitch like Sun Dong-yol, hit like Lee Seung-yuop; play like Lee Jong-beom and live like Lee Ho-joon.” The phrase refers to Lee Ho-joon’s tendency to perform his best in the final year of a contract and get a big deal as a free agent.

However, since signing with the Dinos in 2013 for 2 billion won ($1.8 million) over three years, Lee has been a steady performer. Nonetheless, this year - the final year of his contract - is shaping up to be his best.

The Dinos’ Hobuji sat down for an interview with the JoongAng Ilbo last week.

Q. What was going through your head when you hit the 300th home run?

A. First, I realized my team had just saved some money on flowers. Our team captain (Lee Jong-wook) had been buying flowers every day for the home run celebration. So I told him not to buy flowers. But as we gave high fives at home plate, he handed me a flower and I was moved. I really want to thank my team.

What does the 300th home run mean to you?

Actually, it was something I would have never dreamed about achieving. I want to thank my manager and team for giving me continuous opportunities. I’m such a blessed player.

The Dinos this year are at the top of the league standings.

Of course, that’s because of manager Kim Kyung-moon. He’s a man of his word, and he made his reputation through trust and responsibility. The Dinos weren’t weak in the first place, and the manager was determined to build up the system.

Just like Lee Seung-yuop, you switched to being a position player.

At first, I thought the team signed me as a batter. But manager Kim Eung-ryong (of the Haitai Tigers) asked me to pitch and who would go against his orders? In 1994, the Tigers’ staff was led by Sun Dong-yol. I should have been thankful just to have my name on the roster, but as I was a mop-up relief, I started to lose interest in baseball and I even tried to run away from the team.

What’s the secret to your long career?

I don’t know. People say you have a long career with an ascetic life, but I have been far away from that (laughs). If I had to say one thing, I think it would be that I have avoided a major injury. Even when I pick up a small injury, I receive treatment right away. That helps.

Your wife seems to play a big role in your performance?

Her support is immense. To tell the truth, I don’t cut my toenails until I get home. My wife always cuts them for me. When my lower back isn’t feeling good, she asks me not to bend over. Wait, she also puts shoes on my feet (laughs).

Yes, he has been playing since last year. He was introverted, but he brightened up after playing baseball. These days, he searches for my records and we talk a lot about baseball. My daughter says she wants to play golf. As I look into it, I see that learning golf requires some money, so I’m giving it deep thought (laughs).

These days, fans say, “Play baseball like Lee Ho-joon.” What do you think?

I’m always afraid that phrase has a sarcastic meaning. In the end, I just hope to wrap up my career in my beloved sport beautifully. I want to retire when I decide my skills just aren’t good enough. I think that’s the best way.

Win the championship. You know, my nickname is Hobuji. Because I lead young players and stand in the center, I think it’s possible.