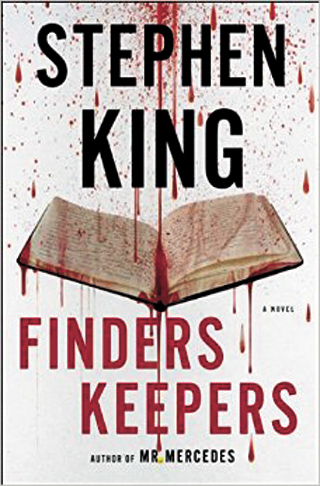 The power of books over readers is a frequent theme in the work of Stephen King.

Who can forget Annie Wilkes in “Misery,” chopping off novelist Paul Sheldon’s foot with an ax?

“Finders Keepers” gives us a con named Morris Bellamy whose obsession with the work of a writer named John Rothstein goes way too far. It’s not a spoiler to say Bellamy kills Rothstein (it happens on page 14), steals his unpublished notebooks and dreams about the words inside them during his 35 locked-up years.

While Bellamy’s doing time, a young boy named Pete Saubers, who is also in love with the work of the late Rothstein, finds those notebooks and figures out they could secure his family’s fortune.

Mom and dad are on the brink of divorce, dad’s life having radically changed when he was a victim of the “Mercedes Killer” a few years ago.

What follows happens fast. At 432 pages, this qualifies as a novella in the King canon. The plot tumbles along, with the past informing the present and the suspense building until the end. At times it feels too contrived, almost as if King is picturing the movie in his head, flashing back decades to fill in holes in the story.

But there’s nothing else to nitpick about. If you like King, it goes down easy. There are flies on dead bodies, melting faces and eyeballs split like grapes. You’ll find yourself cheering for Bellamy’s long, agonizing death.

Best of all, on the final page, you’ll know that what started with “Mr. Mercedes” is meant to be a trilogy.

Psychopath Brady Hartsfield is getting his mojo back at the Traumatic Brain Injury Clinic and that means book three probably isn’t far away.