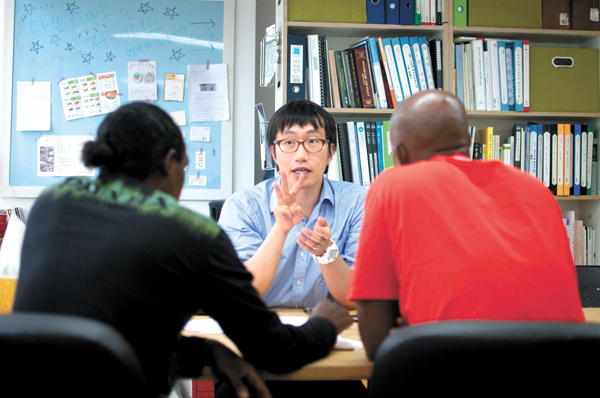 Lee Il, attorney at the Advocates for Public Interest Law center, interviews asylum-seekers in Korea and files lawsuits to help them obtain refugee status in Korea.Provided by APIL

The story of an African man stuck in a deportation room at Incheon International Airport for more than six months spread quickly when it was reported recently, with domestic media dubbing it “the Korean version of Steven Spielberg film ‘The Terminal’ (2004).”

The man - who refused to give his name and will be referred to by the pseudonym “Abel” for the sake of this article - fled his home country, which he also did not want to reveal, and arrived at Incheon International Airport in November 2011.

At first, Abel did not say he was an asylum-seeker and showed a short-term business visa that he later explained he had purchased from a broker in his home country. He tried to enter Korea through an immigration checkpoint at the airport. But he was stopped when he couldn’t provide the name of a domestic invitee, which is mandatory for the C-2 business visa.

He wasn’t allowed into Korea, but he couldn’t go back either.

According to Lee Il, an attorney at Advocates for Public Interest Law (APIL), who helped Abel leave the deportation room after winning the lawsuit he filed, the asylum-seeker in his 20s had fled his home country. Lee said he was “forced to join a military for a civil war that requires him to kill his own people.”

Such a person, according to Lee, should be protected under the Refugee Act as he could be subject to persecution upon returning home.

Under Korea’s Refugee Act, which went into effect two years ago, asylum-seekers can now request a referral procedure at the airport, meaning they will be screened for a maximum of seven days from the application date.

This procedure is to determine whether the individual is eligible to apply for refugee status, a procedure that takes place outside the airport.

However, Abel was rejected during the referral procedure as the immigration officials didn’t believe his story. He was ordered to leave the country, but he refused and was left confined in the 33-square-meter (355-square-foot) deportation room.

The room, which is only meant for temporary use, is equipped with chairs, a pay phone and a shower room. Visitors are each provided with a blanket at night, which gets picked up in the morning. They are provided with a chicken burger and a Coke for every meal.

“I was surprised as well, but so many foreigners can’t make it through the immigration checkpoint at Incheon International Airport,” said Lee. “So until they go back to where they came from, they stay at this temporary deportation room. Usually they stay for one or two days.” 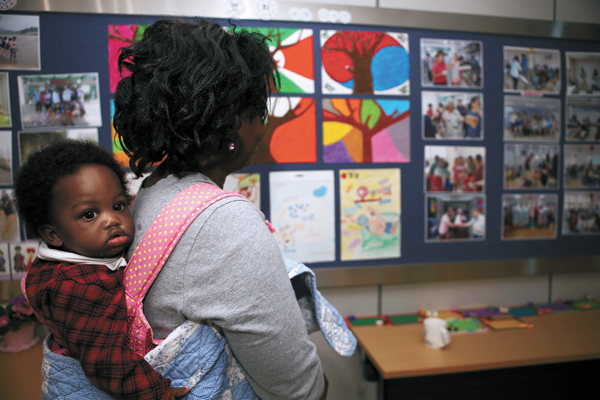 A mother and a child residing at the Immigration Reception Center in Yeongjong Island, near Incheon International Airport. Refugee applicants can stay there for six months. [JoongAng Ilbo]

But for asylum-seekers, Lee says it’s a different story as they can’t go back to their home country.

Lee filed three lawsuits against the Korea Immigration Service and won them all over the course of nearly a year and a half. As a result, Abel was able to leave the airport, meet with him face-to-face and finally have the opportunity to go through the regular refugee status determination procedure. In the end, Abel was able to step foot on the Korean Peninsula.

Currently, Abel is residing in Seoul and has been categorized as an official refugee applicant since January. He is waiting for an interview date, like other refugee applicants, which usually takes about a year and a half. Meanwhile, Abel has to find a way to survive with minimum support from the government.

Saturday marked World Refugee Day, and many public and private groups organized events to raise awareness across the world. Various events were organized in Korea.

July 1 also marks two years since the Refugee Law was enforced, which made Korea the first country in East Asia to enact such a law.

Taking this time of year to examine the current status of the refugee issue here, the Korea JoongAng Daily sat down with two human rights lawyers, Lee and Kim Jong-chul, the director of APIL, last week. Here are some excerpts from the interview.


Q. How did you get in contact with Abel?

Now that lawyers can meet asylum-seekers in the deportation room face-to-face, thanks to you winning the lawsuit, can they now just go in and visit them?

Lee: No. The deportation room at the airport is not a transparent area. The officials don’t give you information, giving all sorts of reasons. So the asylum-seekers themselves have to find a way to get help from outside. Unless they are from a very underdeveloped country, many of them have a smartphone. 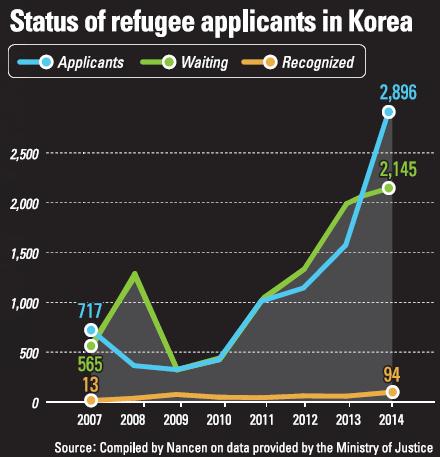 Luckily, since it’s easy to access Wi-Fi at Incheon International Airport, they can search the Internet. Once they get hold of phone numbers of human rights centers for refugees in Seoul, they make a collect call using pay phones and get in touch. Those without smartphones also borrow from others in the deportation room.

Do you know how many people are stuck in the deportation room on average per day?

Lee: As most information about the deportation room is not disclosed, we don’t know how many are in there usually and how many of those apply for the refugee referral procedure.

I asked those who’ve been there while interviewing and I heard that about 20 to 30 people stay there on average.

Of course not all are asylum-seekers as all those who failed to pass through the immigration checkpoint get sent there temporarily until they leave the country. I also heard that airlines do not help asylum-seekers when they express that they want to apply for the referral procedure.

Under the Immigration Control Law, the airline that brings in the foreigners who are rejected from entering Korea has to pay for the expense of using the deportation room until they leave the country.

I personally believe it’s the government’s responsibility, but that’s the current law. It costs 100,000 won ($91) per person per day to use the deportation room and three meals a day - a chicken burger and Coke - so the longer the foreigners stay in there, the higher the financial burden for the airlines.

How is the Refugee Support Center in Yeongjong Island operating? I heard it’s even been renamed as the “Immigration Reception Center” to avoid using words like “refugee” and “foreigner” in an attempt to lessen the protests from Korean residents nearby.

Kim: Refugee applicants can use the center if they wish. They can stay for six months and can extend for another three months. I recently talked to a refugee applicant who lived there until recently and said that the center is about 50 percent occupied.

According to the applicant, some people don’t get accepted because they don’t meet certain standards while others decide not to stay because it’s located too far away from the city. Luckily, I don’t think the center acts as an “isolated prison camp” like we had worried, but there are still many problems.

A number of the children of refugee applicants applied to go to an elementary school nearby, but following resistance from the Korean parents of the students at school, the children couldn’t enroll.

Many fear that too much support for refugees and refugee applicants could trigger an outcome where foreigners such as migrant workers abuse the system and take advantage of the benefits.

Kim: Due to the enforcement of the Refugee Act, the number of applicants skyrocketed. But, like I said, it takes nearly two years for them to receive a date for an interview.

Think about it. The government allows refugee applicants to stay in Korea while they are being screened. They are given a work permit six months after application and can either stay at the support center on Yeongjong Island or receive a small living expense for six months as well.

It takes nearly two years, not for the result to come out but for the interview date to be set, to start the examination of the refugee applicant. Who knows how long it will take for the final decision to be made?

If you are a foreigner in Korea who needs a little financial support - perhaps a work permit and a visa - wouldn’t you apply for refugee status even if you get rejected in an interview after two years?

Lee: It’s a vicious cycle. There are seven officials who examine all the refugee applicants at the moment. Since the number is increasing, their workload is increasing as well. This adds stress and makes the officials fail to work on each case in detail. Like Kim said, it will increase the people who abuse the system, too.