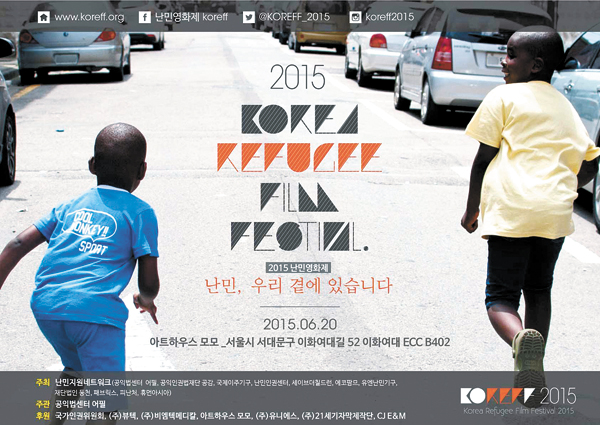 The Korea Refugee Film Festival was held Saturday at Art House Momo in Seoul to mark World Refugee Day. The event showcased three films, and interviews with refugees in Korea were held in between. Provided by the organizer

On Saturday, dozens of people gathered at Art House Momo, a small independent movie theater in western Seoul, to watch the featured film, “Please Answer Me,” an hourlong documentary directed by Kim Yeon-sil that follows the stories of three Congolese families.

The three families have one thing in common: all of them are refugees. The first family was given that status after seven years and several legal battles, while the second waited for eight. The third is still waiting.

The children shown in the film were all born in Korea, however, because their parents are either refugees or refugee applicants, none have been afforded Korean citizenship.

“After being recognized, we can try out naturalization,” said one of the mothers in the film, identified as Betha, who showed up for an interview after the screening. “But most of us don’t want to be naturalized and obtain Korean citizenship because we hope to go back to our home country one day.”

Yet, for their children, she added, it is a different story.

“They’ve never been to Congo and they may not want to go back,” Betha said, adding that her 10-year-old daughter has frequently asked her what being a refugee means.

Each year, the Korea Refugee Supporting Network - made up of civic groups including Advocates for Public Interest Law (APIL), Nancen, Refuge pNan and EcoFemme - marks June 20 as World Refugee Day, organizing an event in Seoul.

Its first film festival, entitled “Refugees: They Are by Our Side,” was held Saturday at Art House Momo, located at Ewha Woman’s University in western Seoul.

“In previous years, other groups organized different events - holding a flash mob or installing booths,” said Kim Jong-chul, an attorney and APIL’s director. “It was APIL’s turn and we were thinking about what to do and we really wanted to show this documentary film [“Please Answer Me”]... so we decided to add two more films and turn the event into a film festival.

“The documentary film by Kim Yeon-sil shows you some instances in which Koreans - without any understanding - discriminate against refugees; and I thought it would be a good opportunity for us to reflect upon how we behave around them while considering all the legal issues surrounding the refugee issue in Korea.”

The other two documentaries shown at the film festival were “Life in a Foreign Land,” directed by Doi Toshikuni, which centers on a Burmese refugee who fled Myanmar in 1991, following the country’s pro-democracy movement, and “The Good Lie” (2014), which follows Sudanese orphans as they make their way to a refugee camp in Kenya.

“We don’t know if the film festival will continue next year,” Kim said. “But we hope to continue to raise awareness about refugees living in Korea in the best way we can.”