Mobile banking heralds the end of the bankbook

Mobile banking heralds the end of the bankbook

Office worker Yoon Jin-ha, 28, doesn’t remember the last time she had her bankbook in-hand. She uses mobile banking to check deposits or make transfers. Even when she subscribes to a new financial product, she does it online.

“Mobile banking is a lot easier because I always have my phone with me,” Yoon said. “When the interest rate is super low like it is nowadays, it is much more beneficial to subscribe to mobile-only products that provide favorable interest rates, even though they’re just 0.2 percent.”

Lee Jeong-ae, 45, stopped by a bank to subscribe a fund. But she left as soon as a clerk explained that the commission would be cut in half, from 1 percent to .5 percent, if she subscribed online. She now checks the yield using a mobile app rather than her paper bankbook.

“If you’re not borrowing a big amount of money like a jeonse [large lump sum] deposit, mobile banking is much easier and much more convenient,” she said. 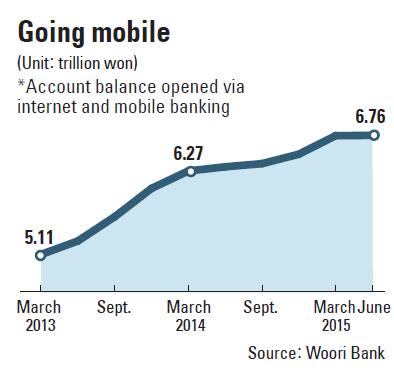 The 14 centimeter-wide and 8.7 centimeter-long paper bankbook, which keeps track of account transactions and deposits, was for years the symbol of a Korean’s diligence and frugality. Every deposit meant inserting the book into an ATM or handing it to a teller, and the book came to represent the incremental steps towards wealth and financial security.

But today, bankbooks are vanishing.

According to Woori Bank, the number bankbooks issued has fallen by almost half in two years. This year, 126,900 were given per month on average. In 2013, the monthly average was 228,480.

As a result, banks are reducing their bankbook orders. KB Kookmin Bank purchased 25.3 million bankbooks in 2010, but cut its order almost in half by 2012, to just 11.58 million. Last year, the bank ordered 8.09 million.

NH Nonghyup is also downsizing its orders. It bought 8.72 million bankbooks in 2013, but last year, it purchased 8.22 million.

“As financial platforms are gradually connected via internet and mobile devices, we will gradually reach an era where there are no physical banks,” said Byeon Yang-kyu, a researcher at Hyundai Research Institute. “It’s possible that in 10 years, you’ll need to visit a museum if you want to see a paper bankbook.”

The advent of mobile banking has done much to hasten the demise of the bankbook. In the past, customers had to bring their book to a bank if they wanted to ensure a transaction had been performed correctly. But today, users can get the same information by checking their phone.

The book may not be the only bit of banking paraphernalia on its way out. Customers used to receive a new credit or debit card from their bank after they opened an account in person. But today, if a customer already has an account with a bank, he or she can open a new account online, opting to forego a new card and instead make payments with their mobile device. As a result, plastic cards may soon be obsolete.

Another reason for the disappearance of the bankbook is cost. Banks give them away for free, but a bankbook for a savings account costs 125 won to 130 won to produce, while the book for a money market account ? which requires more pages - costs up to 145 won. As a result, there is little financial incentive for banks to promote the use of bankbooks.

There is still demand for the books, especially from the older generations. Domestic banks ordered between 7 and 8 million bankbooks so far this year, but that number is likely to decrease. Nearly 16.3 of Koreans in their 50s used mobile banking last year, up from 13.5 a year earlier, according to research conducted by the Bank of Korea.

In the near future, even physical bank branches may become a thing of the past. On May 18, the Financial Services Commission revised the current system to allow customers to use their real names in online banking transactions, as opposed to relying on an account number. The revision, the first of its kind in 22 years, means that users will be able to join a new bank and open an account without signing anything in person, paving the way for online-only banks.

“The financial environment is changing as information technology [IT] advances,” said Seo Byung-ho, a financial industry researcher at the Korea Institute of Finance. “The systems of cash, bankbooks, cards and checks are now evolving into internet-based banks and mobile cards thanks to technological advances in internet and smartphones.”