At U.S. Open, the best shots are off the course

At U.S. Open, the best shots are off the course 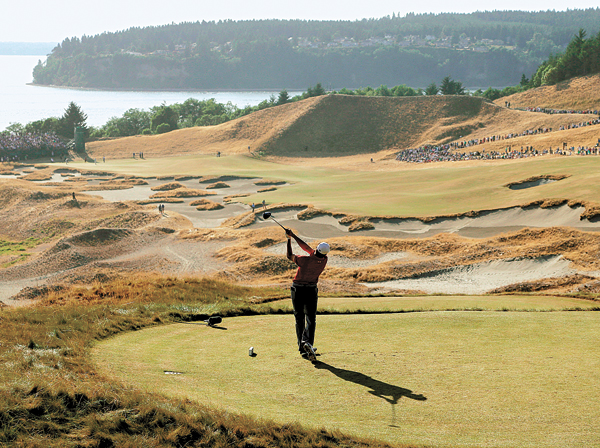 Jordan Spieth tees off at the 14th hole Saturday during the third round of the U.S. Open at Chambers Bay in University Place, Washington. Spieth shareed the lead with three others at 4-under 206 after the round. [AP/NEWSIS]

UNIVERSITY PLACE, Wash. - Phil Mickelson staggered off Chambers Bay after a 74 that put a big dent in his chances to finally win a U.S. Open. He was eight shots behind and had little hope but to hit the gas in a major where neutral is often the best gear.

When asked about his plan for Saturday, Mickelson paused. How could he have a game plan if he did not know what the USGA was going to do?

Shouldn’t the golf course be enough?

The greatest mystery about this U.S. Open was Chambers Bay, an eight-year-old golf course built on a sand-and-gravel pit. Now there is a surprise every day.

What hasn’t changed about the U.S. Open is the complaining.

That is typical from players with the highest scores. In this case, two of the strongest comments were from the second round co-leaders, Jordan Spieth and Patrick Reed.

USGA Executive Director Mike Davis, who has been mentioned as much as any player this week, moved the tee forward on the 18th hole to change it from a par 5 to a par 4 for the second round. It led to an awkward landing area off the tee. Spieth was seizing control, coming off three birdies in his last four holes, when he had no idea where to hit his tee shot. A bunker on the left side was not his first choice.

And when he tried to take on too much because of a 10-foot deep bunker that Davis recently had installed, Spieth’s shot caught the lip and tumbled about 10 yards away into the fescue rough.

“This is the dumbest hole I’ve ever played in my life,’’ Spieth said.

He went on to make double bogey and did his best to keep calm, finish out a 67 and share the lead at 5 under.

Reed nearly wound up in the bunker. His ball somehow stopped a few feet from the edge, and he hit a 7-iron to the middle of the green. From 50 feet away, on the putting surface, he really had little chance to get it close. Reed wound up 20 feet away, three-putted for bogey and a 69 and slipped into a tie with Spieth in the second round.

“I felt like I hit two quality golf shots and had to play Mickey Mouse on the green because the pin was ridiculous,’’ Reed said.

For the rest of the field, or at least the 75 players who made it to the weekend, the biggest complaint was the condition of the greens. As bumpy as they became in the afternoon, it appears to be a case of hit-and-hope. And as always, it is a matter of opinion.

Davis said going into the week that the fescue with patches of poa annua actually became slicker and rolled truer in the afternoon.

“It’s borderline laughable at some of the greens and some of the pin positions,’’ said Henrik Stenson, who fell out of a tie for the lead with a 74 on Friday. “And it’s pretty much like putting on broccoli, as well.

“We have to go out there in front of millions of people and putt on these things,’’ Ernie Els told Golfweek magazine. “The USGA, they have got to take a bit of responsibility.’’

None of this is new. The USGA has shown over the years that it really does not care what the players think, much less what they say. It likes to keep them guessing. No one knows what to expect until they arrive at the course.