Most recently, Samsung C&T inked a deal worth $694 million to build an expressway in Australia, the Ministry of Land, Infrastructure and Transport confirmed Tuesday.

With the contract, the accumulated amount of construction projects won by Korean builders hit $700.2 billion, just a year and six months after it topped $600 billion in December 2013.

Despite disadvantageous conditions in the construction industry abroad, like falling global oil prices and political unrest in the Middle East, overseas construction is considered a cash cow for Korea. 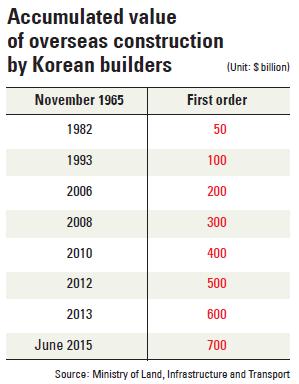 “We will fully support increasing overseas projects as soon as possible so that the total can surpass $1 trillion.”

One of the main reasons Korean builders have been so successful abroad is because foreign investors recognize their diligence.

“The biggest reason Korean builders win those projects is because they’re recognized as able to complete construction within the deadline,” said Kim.

The first overseas project won by Korean builders was an expressway project in Thailand in 1965, inked by Hyundai Group founder Chung Ju-yung, worth $5.4 million.

Although Hyundai Engineering and Construction lost about $3 million on the project, it became an opportunity for other Korean builders to bid for overseas jobs. In 1973, Samhwan Corporation, another Korean builder, won a contract to construct an expressway in Saudi Arabia, worth $2.4 million.

In 1976, the Hyundai Engineering and Construction won an unprecedentedly large project, to build an industrial port in Jubail, Saudi Arabia, worth $940 million - about 25 percent of Korea’s state budget at the time. In 1984, Dongah Construction won the world’s largest irrigation project, dubbed the “Great Manmade River,” in Libya, worth $10.5 billion. In 1993, Korea finally reached $100 billion in total value of overseas projects.

As Korean builders became more confident, the scale of projects won by Koreans has also increased. In 2005, Samsung C&T won its bid for the world’s highest building, Burj Khalifa in United Arab Emirates, worth $360 million. In 2000s, overseas construction by Korean builders expanded $100 billion almost every 18 months on average, and the total value surpassed $700 billion this year, just less than a decade after it hit $200 billion in 2006.

This year, Korea is expected to surpass fifth-ranked Germany in overall construction sales. In 2013, Germany recorded $46.6 billion, while Korea brought in $42.4 billion.

Still, industry observers pointed out there’s much Korean builders must overcome. They should first challenge other emerging markets, such as Asia or Africa, not just focusing on projects in the Middle East, analysts say.

Diversifying their business is also necessary, analysts say, shifting the current focus from construction-only contracts to design and financing.

“Based on their experience in the Middle East, they should expand their business in Asia, where the average housing supply ratio [the number of houses for each household] ranges around only 50 percent,” said Choe Min-su, a senior researcher at the Construction and Economic Research Institute of Korea. “Possibly, the China-led Asian Infrastructure Investment Bank could help them get more opportunities.”

“Korea needs to participate actively in China’s plan to develop underprivileged regions in Asia,” she said.

Still, Korean builders should be careful about competing among each other to win projects in emerging markets, analysts say. Between 2013 and 2014, many large-scale Korean builders lost more than 1 trillion won ($894 million) in overseas projects due to the price competition among local companies.

“It is frequent for Korean builders to try to damage the reputations of their Korean competitors in other countries, not only in the Middle East countries but also in Singapore,” said an employee at a construction company.

Still, employees at Korean builders say it was too much for the state-run Fair Trade Commission to impose billions of won in fines on several Korean construction companies that colluded on the state-run four-river restoration project.

The firms say they can pay the fines, but that the penalty prevented them from bidding on construction jobs overseas.

“Although it is right to impose the fines on Korean builders for the collusion, [the policy makers] need to reconsider the penalty that restricted the builders’ participation in overseas project,” said Jeong Nae-sam, the vice president of the Construction Association of Korea.