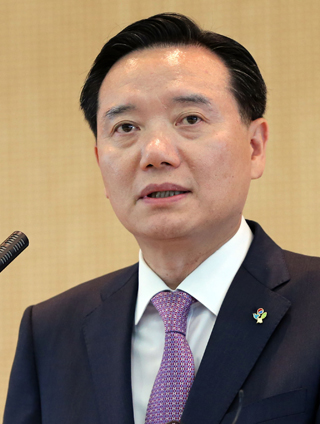 President Park Geun-hye has tapped Kim Hyun-woong, the director of the Seoul High Prosecutors’ Office, as her new justice minister.

The position has sat vacant since Kim’s predecessor, Hwang Kyo-ahn, was sworn in Thursday as the country’s newest prime minister.

The 59-year-old nominee previously worked in key legal positions, including as the director of district prosecutors’ offices in Gwangju and Busan. He also served as deputy justice minister from December 2013 to February this year when Hwang served as justice minister.

Several high court directors and retired prosecutors were considered as candidates for the position, though Kim was reportedly a promising frontrunner as a Jeolla native, which was in line with the administration’s efforts to appoint high-ranking officials from across each region.

The Jeolla region is considered a stronghold of the main opposition New Politics Alliance for Democracy (NPAD). Special treatment for former judges and prosecutors has long been a hotly contested issue in the political arena, though Kim is widely expected to avoid such scrutiny.

Last year, prime ministerial nominee Ahn Dae-hee, a former Supreme Court justice, bowed out after lawmakers discovered he had earned 2.7 billion won ($2.4 million) in the 10 months following his retirement working as a lawyer.

Multiple officials from the Blue House explained that President Park chose Kim over other candidates because the nomination is likely to be agreed upon at the National Assembly. The president did not announce her new nominee for presidential senior secretary for political affairs, however, which was expected to be announced Sunday with her justice minister nomination.