President to mark ties with Japan

President to mark ties with Japan 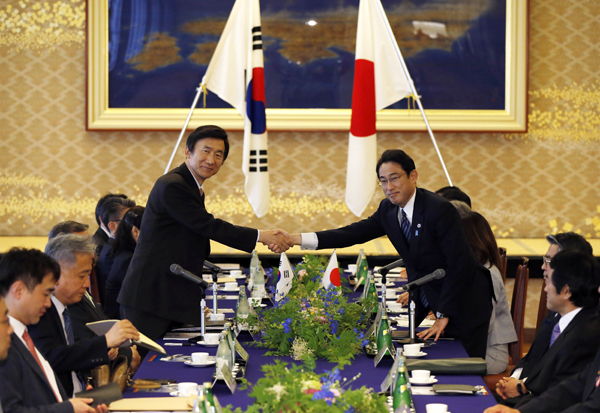 The foreign ministers of Korea and Japan sat down for talks on Sunday to discuss pressing bilateral issues, a symbolic first step to mend strained relations, while the two countries’ leaders are announcing plans to attend events in their respective capital cities to commemorate the 50th anniversary of the normalization of bilateral ties.

Korean Foreign Minister Yun Byung-se on Sunday held talks for the first time in Tokyo with his Japanese counterpart, Fumio Kishida, in which the two envoys attempted to close diplomatic rifts.

Yun departed earlier Sunday on his first visit to Tokyo since taking office in 2013. As well as discussing sensitive history issues, such as the Japanese military’s forced recruitment of wartime sex slaves, the two were expected to touch upon economic cooperation, security and the nuclear threat from North Korea.

Yun said he planned to hold a “frank conversation on a broad range of issues concerning Northeast Asia, including the North Korea problem, and other regional and global issues that interest both countries.”

It has been four years since a Korean foreign minister has traveled to Japan, and observers pointed out that Yun’s visit to Tokyo in itself indicated certain progress amid ongoing diplomatic tension over historical and territorial disputes.

Earlier this month, President Park Geun-hye told the Washington Post that Seoul and Tokyo have made “considerable progress” in negotiations regarding a formal apology by Tokyo and reparations to be made to former “comfort women,” referring to the thousands of young women and girls forced into military brothels by the Japanese Imperial Army during World War II.

Park also implicated during the interview that foreign ministerial discussions to resolve the comfort women issue had a chance at being finalized. However, experts have stated that getting an official apology from Japan and resolving the issue will be difficult.

Another ongoing issue revolves around Tokyo’s moves to include Meiji Era industrial facilities - some of which were venues where Korean men were recruited by Japan as forced laborers during the colonial era - on Unesco’s list of World Heritage Sites.

Park and Abe had not met for formal talks since either took office. A foreign ministerial summit is seen as a precursor to a leaders’ summit.