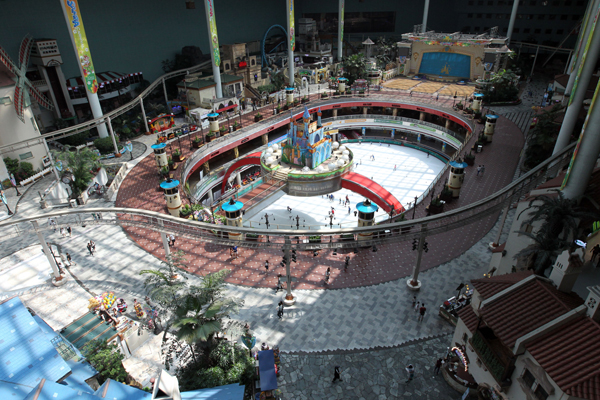 Lotte World, the indoor amusement park in southeastern Seoul, sees few visitors Sunday, as many people have made efforts to avoid crowded places amid the outbreak of Middle East respiratory syndrome (MERS). By Kim Seong-ryong

A Seoul-based attorney has filed a lawsuit against the government over what he said was its poor response to the outbreak of Middle East respiratory syndrome (MERS), which led the disease to spread, infecting more than 150 people and resulting in 25 deaths.

Lawyer Moon Jeong-gu, who works for the firm Hanghil, said Sunday that he had lodged a complaint on Friday with the Seoul Administrative Court claiming that the government was negligent and failed to disclose relevant information to the public in a timely manner.

“In order to prevent the virus from spreading, the government is obliged to provide information about the hospitals and medical facilities confirmed MERS patients visited, but it unreasonably refused to disclose that information for 19 days,” he said.

“The government has committed an unlawful act, which resulted in it losing the opportunity to contain the disease in the early stages and put people at risk for infection.” 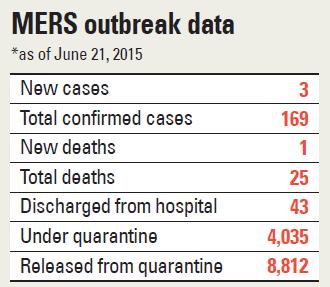 “The government did not provide a list of hospitals that had previously treated MERS patients until June 7,” Moon continued.

He made it clear, however, that the suit was not for the purposes of collecting compensation, but to make official the health authority’s fault.

“The complaint is not to seek compensation from the government, but to confirm the government’s failure in early stages and leave it as official record,” Moon said.

Yet, despite speculation that Moon’s lawsuit would be followed by others, the MERS outbreak in South Korea appeared to be subsiding.

On Saturday, the Ministry of Health and Welfare announced that there were no more MERS cases to confirm - the first time since Patient No. 4 tested positive on May 26 - though three more cases were reported on Sunday. Total cases in the country currently stand at 169.

Patient No. 167 was reported to be a 53-year-old male who came into contact with Patient No. 76 on June 5 at Kyung Hee University Hospital’s emergency room in Gangdong District, eastern Seoul.

But while the number of newly announced MERS patients is on the downswing, the fatality rate has continued to inch upward.

Patient No. 112, a 63-year-old infected at Samsung Medical Center’s emergency room, died on Saturday to bring the death toll up to 25. The disease currently has a fatality rate in Korea of 14.8 percent.

With the disease’s progression slowing down, the health authority has begun discussing standards to proclaim the outbreak officially over.

“We are not in a situation to talk about the end of the outbreak, but we’ve begun discussing standards to proclaim its end, looking to advice from experts in and outside of Korea,” said Jeong Eun-gyeong, an official at the Korean Centers for Disease Control and Prevention. “An Ebola epidemic is considered finished when there are no patients for two maximum latency periods, and the standards to announce the end of the MERS outbreak will be made following those examples.”

The maximum latency period for the MERS coronavirus is two weeks, which means no new confirmations may be found 28 days after the last patient is reported.