Knockout with a silver lining

Knockout with a silver lining 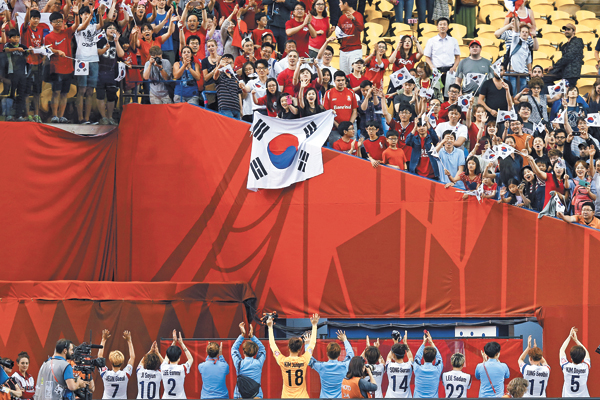 Korean women’s national team players salute their supporters following their 3-0 loss to France in the Round of 16 of the FIFA Women’s World Cup at Olympic Stadium in Montreal on Monday (Korean time). Provided by Korea Football Association

The Taegeuk Ladies’ historic run at the 2015 FIFA Women’s World Cup ended on Monday (Korean time) with a 3-0 loss to world No. 3 France in the Round of 16.

At Olympic Stadium in Montreal, Korea couldn’t match the speed and technique of the one of tournament favorites, as Marie Laure Delie scored twice and Elodie Thomis once to end Korea’s first ever appearance in the knockout stage.

France, the host nation of the next women’s World Cup, will face No. 1 Germany on Friday for a spot in the semifinals.

“The match turned out to be way more difficult than we thought,” said coach Yoon Duk-yeo. “Since we allowed a goal in the beginning, we couldn’t play the match as we wanted.” 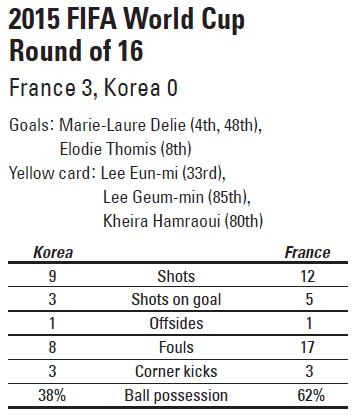 France, a semifinalist in the last World Cup and Summer Olympics, has more than 83,000 registered female footballers, while Korea has fewer than 2,000. “Les Bleues” have six veterans of 100 or more international matches, while Korea has none.

Within 10 minutes of the kickoff, France scored two goals in a similar manner. In the fourth minute, left back Laure Boulleau penetrated Korea’s right side after making a one-two pass with Camille Abily and delivered a short cross to Delie, who tapped it easily into the net with her left foot to put France on the board.

Just four minutes later, it was Thomis who had a one-two pass with Eugenie Le Sommer and then found the net with her left foot.

Korea, which had four goals in its past two matches against Costa Rica and Spain, tried to challenge the French defense with striker Park Eun-sun up front and wingers Kang Yu-mi and Jeon Ga-eul moving on the flanks.

However with Ji So-yun, Korea’s all-time leading scorer with 39 goals sitting on the bench due to an injury, the team struggled to produce scoring opportunities in the first half. Lee Geum-min, the 21-year-old young gun in her eighth international match, was filling in for Ji.

“Ji had a problem in her right thigh after the match against Spain,” said Yoon. “Although the team would have some loss of offense, I thought my player’s future career was more important.”

Making matters worse, goalkeeper Kim Jung-mi had to receive medical treatment after taking an elbow by teammate Park in the 17th minute while leaping for a ball lobbed into the box.

With a bandage on her cheek, the 30-year-old Kim, who faced France in the 2003 World Cup, took another collision just before the end of the first half, but never left the field.

However, she couldn’t stop another goal from France, which was scored three minutes into the second half when Delie found the net again after Le Sommer brought the ball to the end line and passed it back to the 27-year-old striker.

Korea tried to fight back, replacing Park with Yoo Young-a and defensive midfielder Kwon Ha-nul with Lee So-dam, but it wasn’t enough.

After the final whistle, Korean players saluted their supporters and tried to encourage each other.

In 2003, Korea ended the World Cup with three losses, scoring only one goal while allowing 11. But 12 years later, the team collected its first Cup victory against Spain and reached the knockout stage with record of one win, one loss and one draw.

“I hope this tournament serves as an opportunity for Korean female footballers to play more matches in the future,” coach Yoon said. “Young players will be better four years from now because of this experience.”