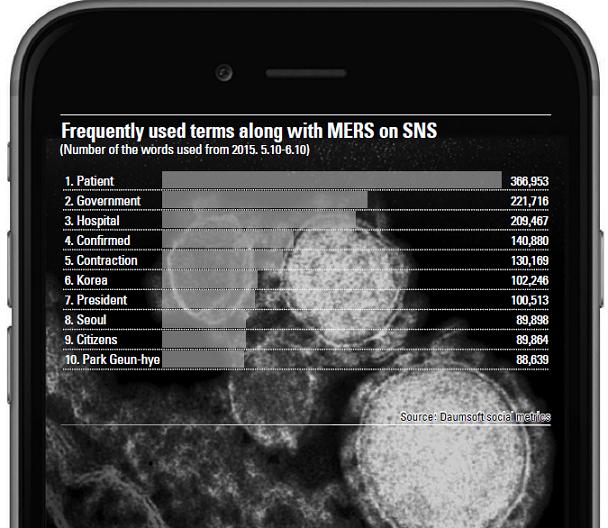 Since the outbreak of Middle East respiratory syndrome (MERS) last month, the Korean government has been criticized for its poor initial response to the disease and its lack of transparency.

The health authority’s belated disclosure of critical information resulted in widespread public distrust, but it also prompted many Internet users to create their own sources of information, mainly on social networking services (SNS), where they feel free to communicate and share information on the virus, which has infected more than 160 people over the past month.

“I feel the information I get from TV reports and newspapers about MERS is not enough, which makes me fear the virus even more,” said a university student who wished to go unnamed.

“So to protect myself and hopefully stop the virus from further spreading in Korea, I personally look for more detailed information and share what I know with others through SNS.”

In an age in which nearly everyone is connected via technology, few are shy in sharing their opinions, especially when it comes to pressing social issues, and the MERS outbreak in Korea has proven to be no exception.

If used correctly, social media can serve as a valuable vehicle for collective intelligence. But, as is the nature of the Internet, it can also have the opposite effect, leading to the spread of misinformation that in turn creates public disorder.

“Internet users share information they’ve accessed from unidentified people [on the Internet] to relieve the anxiety they’re experiencing from not having enough information,” said Hyun Taek-soo, the director of the Korean Social Policy Institute.

According to a recent survey by Daumsoft, which analyzes big data, a few of the most frequently used words on social media last month were “patient,” “hospital” and “contraction,” not to mention “MERS.”

The results undoubtedly evidence a public desire to learn more about the virus, as well as a need to quickly share information about which hospitals MERS patients visited, where they contracted the disease and the route of infection.

Users have posted various commentary on their social media accounts, the most common of which are originally written by the hospital workers affected by the disease. Others include messages detailing home remedies to possibly prevent the virus and warnings that alert people to which hospitals and medical centers MERS patients have been transferred.

“I’m a person affiliated with [redacted] hospital, and a patient suspected to have MERS just came into our hospital,” one such comment stated.

However, in order to regulate information-sharing on the outbreak via social media and control the spread of misinformation, the government has outlined strict punitive measures for those caught spreading rumors.

“We will strictly punish those individuals who disturb public order by publicizing incorrect information,” said Kang Sin-myung, who heads the National Police Agency.

Already, a few people who have posted inaccurate information on their personal social media accounts have been investigated.

And amid the technological buzz, some institutions have even gone so far as to try to capitalize on the recent situation to earn extra cash.

One local oriental medical clinic, for example, claimed that Gongjindan, a multi-herbal medicine, was highly effective at preventing MERS. As a result, the National Union of Korean Medical Doctors requested that the hospital take administrative measures.

However, despite the ill side effects, social media has in certain cases prompted the government to take action.

In January, for instance, after a story about a man who was hit by a car while heading home from the store to buy some bread for his pregnant wife began circulating on the Internet, the government began an investigation to look for the assailant.

Similar pressure also altered the MERS situation. Although the government initially refused to reveal the list of hospitals where MERS patients had been treated, it changed its tune after the public posted the names of a few hospitals on social media.

Two Internet users even created a MERS diffusion map that detailed the hospitals MERS patients had visited and where they were being treated. The map, opened on Facebook, was created by Park Soon-young, the head of the IT company Datasquare, and Lee Doo-hee, the CEO of the IT company likeLion. The map also includes a channel where Internet users can report unfounded information on the system.

Thanks to the strict gate-keeping measures, the map based on the information shared among netizens and the actual list of hospitals revealed by the government turned out to be highly similar.

“We received 340 reports, and 500 people visited our page in seven days,” said a representative affiliated with the diffusion map.

However, the Facebook page was shut down after health authorities publicized the information regarding MERS.

In response to the amount of misinformation present online, a number of experts have also started using their names when writing commentary in an effort to raise the credibility of their information and what they write.

Prof. Heo Dae-seok, who works in the College of Medicine at Seoul National University, recently wrote a blog entry titled, “The Lessons From Swine Flu in 2009 and MERS,” to lend an expert voice to the online debate.

The Korea Health and Medical Workers’ Union also posts updated information on its website based on data it collects from hospitals.

Still, when asked about social media’s effectiveness, most experts share the same view: When used effectively, SNS can have positive effects, though the risk of spreading misinformation is high.

“What happens on SNS should be solved within SNS,” said Hyun from the Korean Social Policy Institute.

“If the government and the media provide timely and accurate information, the next step - whether to believe in the information or not - should be decided by the citizens themselves.”