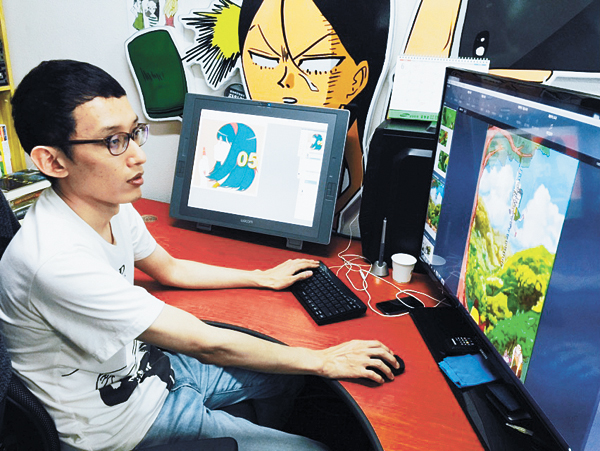 Webtoon artist Ha Il-kwon shows how he works with Webtoon Editor at his studio in Bucheon, Gyeonggi on Thursday. By Moon So-young.Provided by the company

Webtoons, or Internet-based cartoons, will be available with more diverse motion and sound effects.

Naver, the biggest search engine in Korea, also operates a major webtoon platform. It recently launched a program it developed called “Webtoon Editor” that allows any registered webtoon artist to easily use special effects in their works to provide a livelier webtoon-experience to the creators and viewers.

“Go Go Go,” which will have a new chapter every Tuesday on Naver Webtoon, is a modern twist on the traditional Korean fairy tale about Wonhyo the monk. Three generations - a grandfather with Alzheimer’s Disease, a game-addicted father and his son - go on an adventure to find the skull that Wonhyo drank water from. 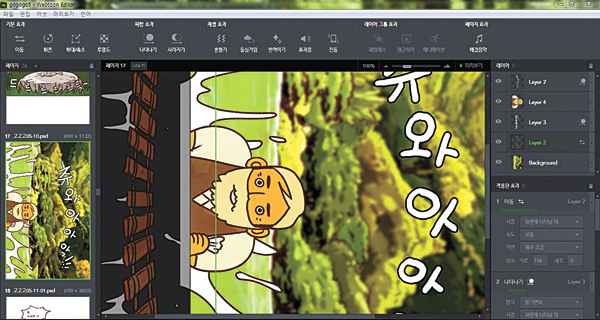 A screen capture of the new program. Provided by the company

As the readers scroll down, they can actually see the moon rising and the buildings in the far distance getting larger as if the readers are getting closer to them.

The special effects do not stop there.

When a villainous character shoots a rifle, the vibration can be added. Dialogue that the artist wants to emphasize continues to flicker on te screen.

What differentiates this new type of webtoon from the so-called smart toon, which was more of a Flash version of a webtoon that showed one cut at a time when the user tapped on a screen, is that it strictly adheres to the traditional scroll-down format of webtoons, while showing the special effects at a timely moment depending on how fast the readers scroll the webtoon down.

As the readers scroll down, a rope featured in Ha Il-kwon’s latest work “Go Go Go” gets longer, which more vividly shows the characters descending from a tree. Screen capture from Naver Webtoon

Only four chapters of “Go Go Go” have been released to date, but the viewers’ responses have been mostly positive. They comment that the special effects startled them. When a phone abruptly vibrated, they thought that was “very cool.”

In a brief interview last week with the Korea JoongAng Daily at Korea Manhwa Museum in Bucheon, Gyeonggi, where his studio is located, Ha said that one of the best parts about the new editing tool is that it “doesn’t interfere with the conventional format of reading webtoons [scrolling up and down], while helping the webtoon artist to express his or her intention fully in a limited space.”

Ha, who has maintained a prominent position in the field for 10 years, is known for bringing ingenious subjects to his work such as public bathhouse or alien invasions, yet still tell emotionally touching stories that both young and older readers are able to relate to.

As a pioneer in using cutting-edge technology, Ha had a positive outlook for the future of the business, and he definitely believes in collaborating with new technology.

“One of the comments I read about ‘Go Go Go’ was that the readers felt like it was 4DX content. Technology will evolve continuously and I think reading 3-D webtoons [without glasses] will become possible soon,” the 32-year-old said.

So far, Ha has been using a special effect called “Parallax” the most, which enables the artist to express distance by overlapping several layers of pictures on a single cut and making them scroll down with different speeds. In this way, a background that scrolls down at a lower speed compared to objects in the front allows the artist to add a sense of dimension into their works.

In a complicated scene, Ha said that he used as many as 12 layers to precisely position the landscape in the back and the character in the front.

The new editor tool enables a number of innovative effects to be shown on webtoons, and it shows that a lot of thought and time was put into programming it.

According to Kim Hyo, a senior researcher at Naver Labs, who was at the helm of coming up with the new program, the developers focused on two priorities: an easy-to-use format for webtoon artists and a versatile applicability for all platforms and operating systems.

“If you take a look at Horang’s previous work ‘Ok-su Station Ghost’, which adapted many special effects, the critical motions don’t show on mobile platforms, so when the hands are supposed to appear on screen very abruptly, they are there from the beginning,” Kim explained.

He added that the new program, as well as the webtoons generated from it, will be available on all platforms regardless of their operating systems.

About 17 patents related to the program have been filled out so far, according to Kim.

The next artist to make use of the editing tool will be webtoonist Whanj, who will introduce “No Malice,” which is said to have put a lot of emphasis on sound effects.

Beginning in July, Naver Webtoon will run an annual summer horror series under the theme “Goosebumps,” in which selected webtoon artists will publish short works using the editor tool. It should be a nice opportunity to test the potential of the newly designed program.

Some 50 artists have applied to participate in the event so far, according to Naver.