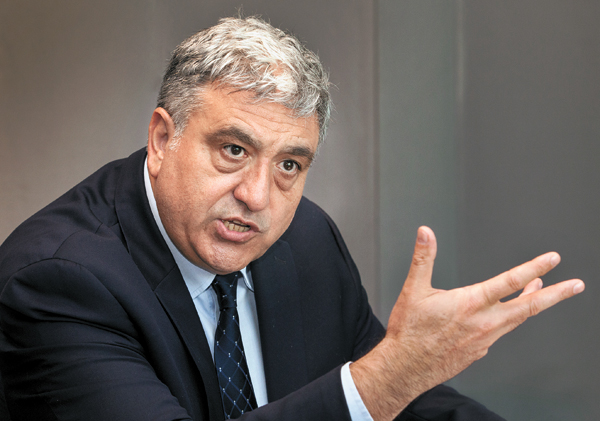 The impact on Korea when the U.S. Federal Reserve starts to raise its benchmark interest rate won’t be too severe compared to other emerging economies, says a U.S.-based economist, thanks to its strong foreign reserve surplus and well-established credibility with foreign investors.

Ali Kutan, an economics professor at Southern Illinois University and former adviser to the World Bank specializing in financial stability in emerging economies, was in Korea to attend the Global Financial Stability Conference in Seoul.

In an interview Monday, he said a slight outflow of foreign capital will actually help the Korean economy by depreciating the won and boosting export competitiveness.

“The Korean economy is strong. Investors have certainly had confidence in the Korean financial market, because Korea has strong current account surplus and doesn’t rely a lot on short-term debt,” said Kutan. “I don’t think foreign investors will panic.”

Q. Korean exports have recently lost competitiveness because of the weak yen. Should the Bank of Korea do the same as the Bank of Japan and depreciate the won?

Relatively speaking, Korea should worry less. Currency is still important, especially for those companies that have similar product lines to Japan, like cars and mobile phones. Private sectors always complain and force central banks to intervene to improve currency competitiveness.

Of course, central banks may intervene to depreciate the currency and gain price competitiveness, like Japan has done. But I wouldn’t recommend that because it simply generates a currency war as other countries would want to retaliate.

A Bank of Korea intervention to depreciate the won would have only a short-term impact, triggering neighboring Asian economies to join the currency depreciation competition.

The Korean government should instead aim for long-term strategies to boost industrial competitiveness.

For now, faced with the longstanding depreciation of the yen, Korean manufacturers should consider taking advantage of cheap Japanese suppliers or moving production facilities to the country’s largest buyer, China. Korea should produce goods that reflect the needs of customers there and sell them there, minimizing production costs as much as possible.

In the long term, the only way to boost Korea’s export competitiveness is to not compete on [price] with other players like Japan that have similar industrial strengths.

Korean exporters should seriously think about enhancing the quality of their products and services. Many American consumers have switched from Japanese to Korean cars, thanks to the drastically enhanced quality of Korean cars over the past five years or so.

Government spending in R&D, quality management and innovation are important via funding and subsidies and pushing R&D policies. This will help lift the Korean economy in both the short term and long term.

I think hastily encouraging domestic consumption via further lowering base rates is a dangerous strategy because it could result in inflation.

If the central banks lower interest rates further, this helps the private sector to expand investments, but it also encourages domestic consumption, which may bring up interest rates again and eventually cause the Korean currency to appreciate.

Do you think the Bank of Japan will maintain its currency depreciation strategy?

Japan needs to be careful. It is not a sustainable solution from a long-term perspective, which triggers other countries to do the same and may hurt regional economies or even the global economy at the end of the day.

Instead of trying to lift economy through central bank intervention in the currency market, governments should instead allocate more to be spent on the private sector.

As an expert on global financial stability, how do you view the global economy as of now? Are emerging economies ready for U.S. interest rates to rise?

The U.S. Fed is very credible, letting other countries about its intention regarding raising interest rates. The signal indicates that will happen within three to six months.

How do you view the Korea’s situation after the U.S. Fed raises its base rate, compared to other emerging economies?

Many Korean economists and investors are worried it could be a great risk to the Korean economy, but some say it won’t have much impact.

As mentioned, Korea is much further matured than other emerging economies, with much larger confidence from foreign investors, thanks to current account surplus and [foreign exchange] reserves. Those two factors will cushion any shocks coming from the United States.