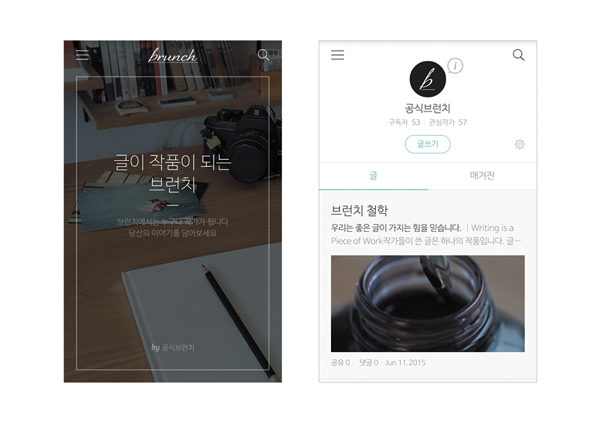 Daum Kakao released a beta version of content-publishing platform “Brunch” on Monday. Provided by the company

Brunch is a platform for people to publish their compositions in an easy-to-read format reminiscent of magazines. For example, it allows users to choose a cover photo for their postings.

The company said editing tools - to change font sizes and the spacing of text - are aimed at increasing legibility.

The trial service is available on PCs and smartphones, though an iOS version has yet to be announced.

In the beta version, users can edit their postings, but sharing is not allowed until the official version comes out.

But they can get an idea of what it will be like to show their content to others because the platform released some postings by selected authors.

“Until the service is stabilized,” said Im Seon-young, a public relations worker at Daum Kakao, “we will post content by 1,000 contributors that we randomly chose in an open contest.”

The selected authors include students and office workers as well as professional artists, photographers and novelists.

The platform is also focused on compatibility between online and mobile versions.

On the PC version, users can see how a posting will be displayed on mobile devices.

In the “Magazine” section, users can see a set of categories. They choose which one suits their work best.

“Brunch will let anybody who loves writing share it with others and produce content more easily,” said Hwang Seon-ah of Daum Kakao, who spearheaded the launch of Brunch.