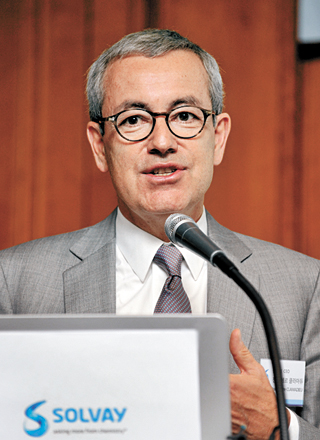 Marking the 40th anniversary of its arrival in Korea, Belgian company Solvay says it will develop its office here into a hub for research and development of special chemicals.

The announcement came after the global chemical producer recently announced it would build a 121 billion won ($110 million) silica plant in North Jeolla.

Jean-Pierre Clamadieu, CEO of Solvay, reviewed the company’s history in Korea and discussed ongoing and future projects during an anniversary event Monday at the Millennium Seoul Hilton Hotel.

Clamadieu said Solvay continues to regard Korea as an important base for research and production because it is a promising market with many of the company’s partners operating here, including Samsung Electronics, LG Electronics, Hankook Tire and Nexen Tire.

“Sales generated from Korea account for 20 percent of the entire Asian market, which is not that big,” he said. “Still, Korea is an important market with great prospects because of the rapid development of cutting-edge industries and large pool of well-trained researchers.”

The latest push in Korea includes Solvay’s plan for the silica plant in the Saemangeum Free Economic Zone in Gunsan, North Jeolla, which sits on reclaimed land off the west coast.

Solvay broke ground for the plant in April to meet the growing demand for energy efficient tires, according to the company.

The Saemangeum Free Economic Zone has attracted such domestic and foreign companies as OCI, Toray from Japan and CNPV Solar Power from China.

Clamadieu said the decision to build the plant there is aimed at better serving regional clients such as Hankook Tire and Nexen Tire.

He emphasized the chemical company fully intends to consistently invest in Korea.

“We can’t reveal a specific plan here,” he said. “But what I can say is that we will continue to make different medium- and long-term investments in Korea.”

The new plant will cooperate with Solvay’s Research and Innovation center at Ewha Womans University that opened last year.

The research center is dedicated to developing lithium-ion batteries and materials for OLED displays and cars to reduce energy use.