Veggie prices spike thanks to drought

Veggie prices spike thanks to drought 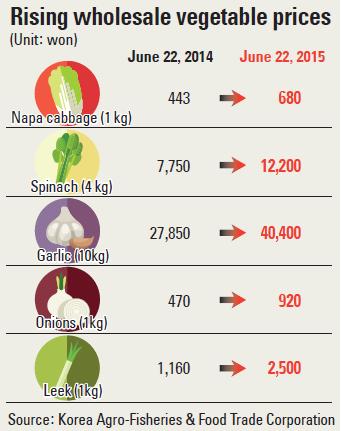 Vegetable prices are rising sharply due to one of the worst droughts in years, deepening worries about food costs and sparking moves by provinces and the Agricultural Ministry to contain the rise.

The price of leeks, another staple in local households, rose 116 percent year-on-year to 2,500 won per one kilogram.

This year’s price spike follows unusually high temperatures and a nationwide drought. In the past couple of years, vegetable prices had actually been on a downward curve due to oversupplies thanks to good harvests.

“Prices seem to have gone up a lot but that’s partly because of last year’s comparatively weak prices,” said a spokesman for the Korea Agro-Fisheries and Food Trade Corporation, a government agency that keeps track of food prices.

“Obviously, droughts and unfavorable seasonal conditions have prompted prices to rise more sharply than we anticipated.”

Also, many farms decided not to plant onions this year after their prices tumbled last year.

Onion supplies for this year are seen at 1.1 million tons, about 20 percent less than last year, according to the Korea Rural Economic Institute.

Garlic is also in short supply due to the hot weather and a decrease in the amount planted.

“Earlier in the season, it was cabbages and leafy vegetables that were seeing price hikes. Now we are seeing prices of other key staples go up as well,” said a vegetable merchandising manager at a leading discount retailer.

“We are concerned that situation may get worse with the summer, unless we have big rains.”

“Price hikes have been unbelievable this month,” said a 59 year-old owner of a prepared home meals store in Jamsil-dong, southeastern Seoul. “Spinach prices have almost doubled compared to a month ago, so I’m thinking of taking it off the menu.

“I will either have to cut down the amount served, or take a number of items off the menu completely because I cannot sell side dishes at a loss. My customers would not be very happy about this,” she added.

Both central and provincial governments are stepping up efforts to alleviate the situation amid worries that the vegetable price hike will persist through the summer.

The Ministry of Agriculture, Food and Rural Affairs said earlier this month it has 62.5 billion won in reserves for drought relief.

The ministry said it was setting up a task force consisting of agricultural experts to set up long-term plans, and was also reviewing the use of water reserves in four major rivers.

Korea Hydro and Nuclear Power is also working with the government to increase the amount of water released from dams at major rivers.

“If prices go up more than reasonably, we are going to release [vegetable] reserves at a reasonable time,” said Kim Dal-yong, a senior official at the Korea Agro-Fisheries and Food Trade Corporation.