Positive notes at celebrations of 1965 treaty

Positive notes at celebrations of 1965 treaty 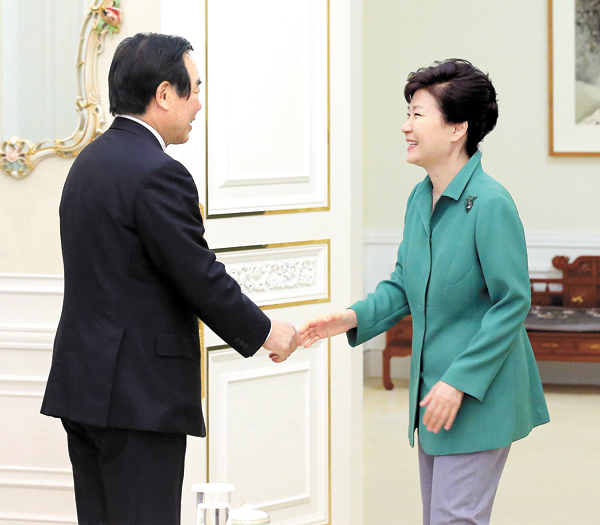 Leaders of Korea and Japan took a step to improve strained bilateral ties on Monday, as President Park Geun-hye of Korea and Japanese Prime Minister Shinzo Abe each attended ceremonies to mark the 50th anniversary of the start of diplomatic relations.

Both vowed to look beyond the past.

“It is important to put efforts into putting away heavy baggage from the past with the mindset of reconciliation and mutual prosperity,” Park said at a commemoration event hosted by the Japanese Embassy in Seoul. “When the two countries start putting in efforts, this year, the 50th anniversary of diplomatic normalization, will become the starting point for the two countries’ new future together.”

Monday marked the half-century anniversary of the establishment of diplomatic relations between the two countries. On June 22, 1965, Korea and Japan signed a historic treaty to normalize diplomatic and economic relations two decades after Korea was liberated from Japanese colonial rule. 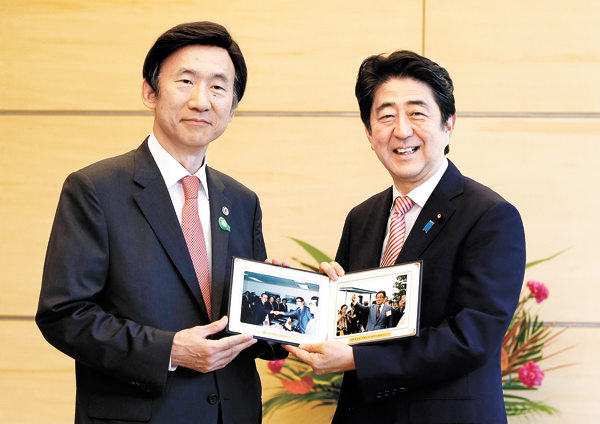 Earlier in the afternoon, Japanese Prime Minister Abe attended a similar event hosted by the Korean Embassy in Tokyo.

In his speech, Abe said, “The two countries should look back on the history of their friendship’s development for the past 50 years and look ahead into the next 50 years and open up a new era by holding hands together.”

He also said strengthening cooperation between Korea and Japan and the trilateral cooperation of Korea, Japan and the United States are crucial for the peace and prosperity of the Asia-Pacific region, calling Korea the most important neighbor of Japan.

Abe said cooperation between Korea and Japan on global issues will define a new bilateral relationship and promised to work together with Park to improve the two countries’ ties.

Relations between Korea and Japan have reached perhaps their lowest ebb over the last few years because of the Abe government’s revisionist attitude toward history, including Japan’s colonial rule of Korea and its wartime misdeeds. Japan’s claim over Korea’s Dokdo islets hasn’t helped.

Bilateral relations further deteriorated as Tokyo shrugs off Seoul’s demand for a formal apology and reparations for the former “comfort women,” thousands of young women and girls forced into military brothels by the Japanese Imperial Army during World War II.

Since Park took the office in 2013 and Abe in 2012, no summit has taken place between the two leaders, the most telling indication of how frozen ties between Seoul and Tokyo have become.

Another significant development came Monday when Park received a special envoy from Abe before going to the reception. Fukushiro Nukaga, chairman of the Japan-Korea Parliamentarians’ Union, paid a visit to the Blue House.

During the meeting, Park said Abe must acknowledge Japan’s past misdeeds when he makes a statement on Aug. 15, the 70th anniversary of the end of World War II. Concerns have grown in Korea and other former colonies of Japan that Abe will dodge the historical truth and Japan’s culpability.

Nukaga addressed the history issue and spoke for Abe, saying the prime minister will respect and uphold two landmark statements of contrition issued by Japanese leaders in the past, Yohei Kono and Tomiichi Murayama.

The 1993 Kono statement accepted the fact that Japan is responsible for the comfort women system. Murayama, who was prime minister on the 50th anniversary of the end of World War II in 1995, delivered an equally heartfelt apology for Japan’s invasion of neighboring countries. It is now known as the Murayama Statement.

Nukaga said Abe has expressed his “heartache” for the people who had painful experiences due to the comfort women system of the Japanese military. Abe’s special envoy promised efforts to facilitate progress in ongoing negotiations between the two countries on the comfort women issue.

The comfort women issue is perhaps the thorniest between the two countries. Seoul has pressed Tokyo to make a formal apology and reparations to the former sex slaves, but Japan has refused, saying all such issues were settled in the treaty signed 50 years ago.

Korea maintains those issues were not resolved by the treaty.

Earlier this month, President Park told the Washington Post that “considerable progress” was made in recent negotiations on the comfort women.

Earlier Monday, Foreign Minister Yun paid a visit to Abe and delivered a message from Park. The meeting in Tokyo lasted about 25 minutes.

“I sincerely hope that pending issues will be resolved smoothly so that this year, the 50th anniversary of the normalization of diplomatic relations, can serve as the starting point for the two countries’ new future,” Park said in the message.

Abe responded by saying he will work with Park to improve bilateral ties for the people of the two countries and the future generation. “There were various challenges and problems between Korea and Japan, but it is important to have a candid dialogue,” Abe said.

Another sign of progress in resolving the history issue was also made Sunday when Yun met with his Japanese counterpart, Fumio Kishida, during his first visit to Tokyo since taking office in 2013. The two ministers discussed Tokyo’s moves to include Meiji Era industrial facilities on Unesco’s list of World Heritage Sites. Some of those venues were where Korean people were forced laborers during the colonial era.

“We agreed to closely consult about the issue based on the mutual understanding that it should be smoothly concluded through talks,” Yun said Sunday after his meeting with Kishida, hinting that Tokyo has agreed to make public the history surrounding the sites during its campaign for the listing. About 57,900 Koreans were forcibly recruited to work at seven of those sites during Japan’s 1910-45 colonization of Korea.

Speculation is high that Park and Abe will finally have a bilateral summit in the coming months. “When trust is accumulated and the condition is ripe, I believe the time for the summit will also come,” Foreign Minister Yun said Monday after his meeting with Abe.

While no summit between the two leaders has taken place, they had a trilateral meeting with U.S. President Barack Obama in March 2014 in The Hague, but the mood was extremely icy.

They had a couple more encounters including a dinner at an Asia-Pacific Economic Cooperation summit in October last year and the funeral for Singapore’s founding Prime Minister Lee Kuan Yew in March, but they had no formal dialogue with pre-arranged topics.

Until now, Abe has repeatedly said he wants to have a summit with Park, but Korea says a meeting can only take place when there is a progress in the history issue.

Diplomatic observers said it is most feasible for Korea to have a bilateral summit with Japan on the sidelines of a regional summit.

“The most ideal scenario we think for now is hosting a Korea-China-Japan summit in Korea around October and hold a bilateral summit with Abe on the sidelines of it,” a Foreign Ministry official said. “The plan has an advantage because Korea will be the host.”

Foreign Minister Yun has already said that the trilateral summit is the administration’s most important diplomatic goal for the second half of this year and he wishes to host it in Jeju. He made the remarks last month during the Jeju Forum for Peace and Prosperity. The three countries had a trilateral summit in Jeju in 2012.