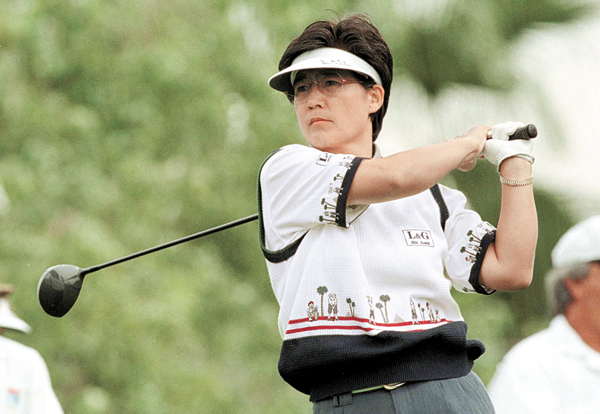 Korea is no longer an outsider in women’s golf these days after the achievements of LPGA Hall of Fame inductee Pak Se-ri and world No. 1 Park In-bee as well as others.

Behind their success is Ku Ok-hee, who is regarded as the pioneer and godmother of Korean women’s golf.

The words “first” and “most” are nearly always used when describing Ku, who died in 2013.

That’s because Ku was the first Korean to win on the JLPGA Tour and LPGA Tour, and the first inductee of the KLPGA Hall of Fame.

After all, Ku has been the symbol of Korean women’s golf and a role model to many future stars.

Ku, born in Yeoncheon County, Gyeonggi, in 1956, had three older brothers, and she didn’t have an easy childhood as her parents died when she was in middle school. After graduating from high school in 1975, the 162-centimeter (5-foot-4) Ku was introduced to golf when working part time as a caddie at 123 Golf Club.

Ku wasn’t a natural athlete, although she was shot-putter in middle school and distance runner in high school. But her forte was determination.

“If my body hadn’t been weak, I would have stayed in track and field and never thought about playing golf,” she told the JoongAng Ilbo.

Every day after caddying, Ku practiced by hitting 24 boxes of golf balls.

“When I asked Ku to do five things, she always accomplished 10,” said Han. “She was a mentally strong person, practicing more than any man.”

Three years after swinging a club for the first time, Ku passed the professional test of the KLPGA in May 1978 and became one of four women, along with Kang Choon-ja, Han Myung-hyun and Ahn Jong-hyun, to earn the title of professional golfer.

Ku’s first victory came in the Quenam Open in 1979. The following year, she won all five KLPGA events. When she successfully defended her title at the 1981 Quenam Open, Ku set the record for consecutive KLPGA wins.

In 1982 at the KLPGA Championship, she beat Ahn by 20 strokes to take the trophy.

Korea was too small of a stage for Ku, who had bagged 16 trophies by 1983. Her first destination was Japan, where she easily passed the JLPGA Tour pro test.

Playing as a Korean in Japan wasn’t easy, as Ku often endured discrimination and heckling. However, she collected 23 wins through 2005 and became a legendary figure on the JLPGA Tour.

“Not only when I first learned golf, but also whenever I faced new challenges, I had faith that if I knocked at the door, it would be opened,” she said. “Because of that, I was able to overcome discrimination.”

After success in Japan, Ku knocked at the door of the LPGA Tour in the United States. After joining the tour in 1986, she made history two years later at the Standard Register Turquoise Classic by becoming the first Korean to win on the LPGA Tour.

Due to sponsorship issues and the physical drain of travel, she decided to focus on the JLPGA from 1993.

After experiencing Zen meditation in the early 1990s, she began mediating for an hour before sleeping and avoided fried and processed foods. This lifestyle helped her win the APiTa Circle K Sunkus Ladies Open in 2005 on the JLPGA Tour at the age of 49.

After 2007, Ku returned from Japan to establish a golf academy in Korea and play some senior tour events, while serving as vice president of the KLPGA.

In April 2011, Ku became president of KLPGA, but a problem with the election process nullified her victory.

“It wasn’t her intention, but she was pushed by others to run,” said Han. “In the end, it wasn’t a good result, and she had hard time after that.”

After the election problems, Ku went back to the golf course to pursue one final victory.

“Since I was 35, I thought about retirement every five years,” said Ku. “Sometimes it’s embarrassing to play with players who are like my granddaughters, but I felt pride in staying on the tour.”

However, Ku’s wish never became true as she died of a heart attack at her residence on a golf course in Shizuoka, Japan, in 2013. The government posthumously awarded her the Order of Sport Merit for her efforts in local golf community.

Ku never had a husband, and whenever asked about it, her response was she was “married to golf.”

“I tried to become a golfer because I yearned for new things,” she said. “I always thought I was a lucky person to have a good job like playing golf.”

Most wins by a Korean (23) on JLPGA Tour

Tied for most wins (20, along with Shin Jiyai) on KLPGA Tour