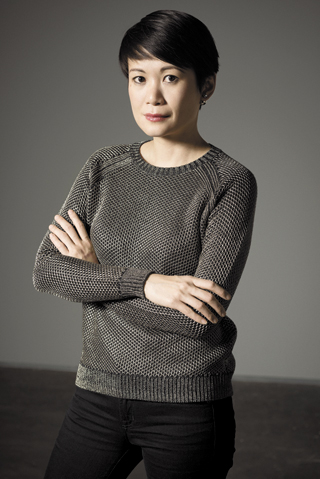 Adeline Ooi. Provided by the organizer

BASEL, Switzerland - Art Basel’s third modern and contemporary art exhibition in Hong Kong, held in March this year, proved to be a huge success despite its fledgling status.

The organization just launched its inaugural show in 2013, but in that time the fair has gained a reputation as a renowned platform for artists and galleries in the region to showcase their work.

And behind this impressive achievement is art specialist Adeline Ooi, who was named Art Basel’s new Asia director at the end of last year.

Malaysian-born Ooi recently paid a visit to the Art Basel show that kicked off June 18 in this Swiss town, the first time since she assumed her new post.

“You should be happy for Asia,” the 38-year-old said in an interview with the Korea JoongAng Daily. “Asia is a good place to be an artist and there is more and more interest from the rest of the world.”

Though there are typically a multitude of Chinese participants in the show, largely due to the country’s massive population, it did not in any way diminish the efforts of the Korean or Japanese artists, she added.

The following are edited excerpts from the interview:

Q. How did sales turn out on the first day of the preview?

A. We don’t really handle the sales. It’s really up to the gallery owners, but it’s been strong.

The Art Basel show in Hong Kong, held March 24-26, was highly received by the art community.

Size-wise, Hong Kong was not much bigger this time compared to the previous year. But I think the size of the audience and its visitors made us feel like we are on the right path.

Several major Korean galleries in recent years have been promoting Dansaekhwa, a style of monochrome painting that originated in the 1970s.

Those are some great works. I am a huge fan of [Korean artists] Lee Ufan and Ha Chong-hyun. I think, why not promote it if there’s strong material to promote? It’s really about what the galleries are passionate about, but at the same time, you also have very interesting contemporary artists like Haegue Yang and Do Ho Suh.

You see Nam Jun Paik everywhere as well. It’s about whatever material is available and Dansaekhwa is becoming that. It’s a new discovery and it’s great that the world loves it.

Dansaekhwa artists date back to the 1970s.

I think there is something about Dansaekhwa that transcends all cultures and there is a beauty to it. It’s the kind of work people understand. Sometimes there are trends, but I think there are works that transcend time. Korea has a great video artist in Kimsooja, whose work is only more respected as time goes by. Korea should be proud that there is some great Korean artwork out there.

Hong Kong vowed to earmark 21.6 billion Hong Kong dollars ($2.7 billion) for M+, a giant new museum project scheduled for completion in 2017 for the West Kowloon Cultural District. What is your view on this government-led support?

The collection is not just about Hong Kong, but about Asia and the rest of the world. It’s a wonderful thing when the government supports a government institution, and Hong Kong needs these institutions. We are waiting for M+ and it will also make Hong Kong much more dynamic as an art city. It’s great that there is government support. I’ve seen different parts of the world with no support at all. The driving force comes from different sectors - whether it’s private collectors or the artist community - but if you have all of the different elements coming together, it will make it even stronger.