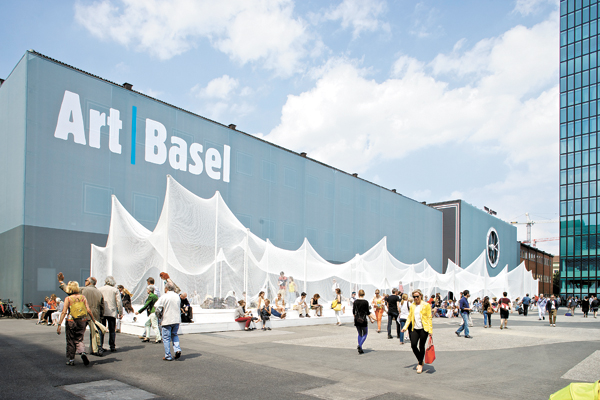 Art Basel 2015 in Switzerland. Provided by the organizer

BASEL, Switzerland - Reports out of Art Basel in this Swiss city indicated impressive sales on June 16, the first of two days that a select group of VIPs and press members were offered a peek at an array of stunning artwork from around the world.

International master painter Lee Ufan’s “From Line No. 790136” sold for $900,000 to an American collector on the first day, alongside a variety of other Korean artwork.

The oil painting’s sale, secured by the Los Angeles-based Blum & Poe art gallery, was attributed to its Dansaekhwa style, according to Jeff Poe, one of the co-owners of the gallery.

Dansaekhwa refers to a style of paintings in a single color that was largely introduced until the 1990s within international society as “Korean monochrome painting.” 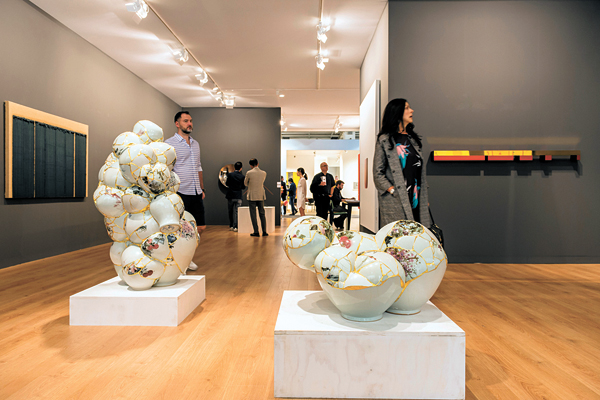 Lee, 79, is known for paintings and sculptures that naturally encourage quiet meditation and is a major figure in the Dansaekhwa school.

Last year, he was the seventh contemporary artist to ever hold a solo show at France’s Versailles Gardens.

The central Seoul-based Kukje Gallery, the key pioneer and promoter of the latest Dansaekhwa boom, also sold a few of Lee’s pieces on the first day. 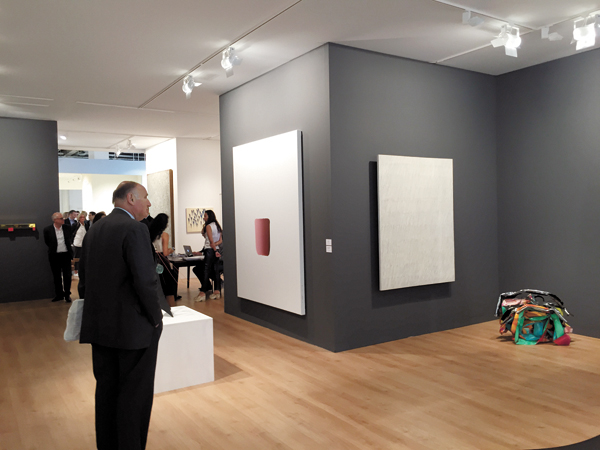 Kujke and PKM are two of three Korean galleries that participated in Art Basel 2015 in Switzerland.

Yun, widely compared in Korea to postwar artist Mark Rothko, passed away in 2007, and the recent international popularity of monochromatic works indigenous to Korea has resulted in nearly a seven-fold increase in the value of his paintings, according to PKM.

“We saw unbelievably remarkable sales on day one,” Lee Hyun-sook, founder and CEO of Kukje Gallery, said on June 17.

She received an endless array of collectors at the booth during the first day of preview, which she said resulted in the sale of 27 pieces brought over from Seoul - an impressive outcome.

“We had to replace all of the works on display at the booth on the second day,” she noted. 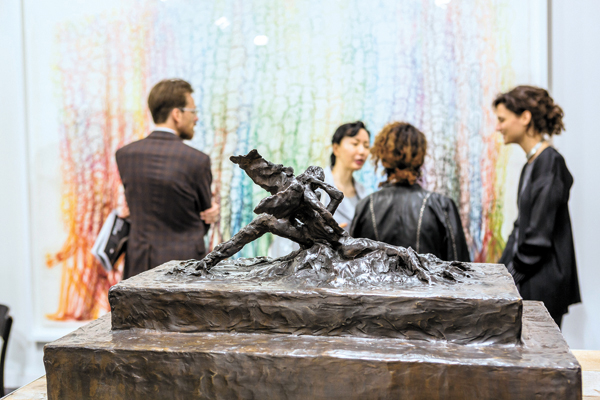 Korean artist Do Ho Suh’s latest work ”Myselves” hangs on the wall at the booth for New York gallery Lehmann Maupin. Provided by the organizer

Dansaekhwa-style paintings drew international attention after Kukje showcased a focused project with artist Ha Chong-Hyun at Frieze Masters in London in October. The project was at the same time the gallery was exhibiting “The Art of Dansaekhwa” in its Seoul space.

“Dansaekhwa tends to lure the audience at first glance for its sophisticated imagery. But viewers are even more attracted after learning about the artworks’ historical implications,” said Zoe Chun, the communications director at Kukje Gallery. “That makes it much easier for galleries to make the audience understand contemporary artists like Haegu Yang in a related context.”

Dansaekhwa - often compared to postwar Japan’s Mono-ha and Gutai Group - describes a historical art movement that began in the 1960s based on the experiences of painters who made up the first generation of Korea’s modern political activists.

The artists stood on the frontlines of the anti-authoritarian movement and confronted the transformation of society under Park Chung Hee in the 1970s.

The term was first used in the Gwangju Biennale in 2000 after art critic Yoon Jin-sup coined it.

Some of the works by today’s hottest and most internationally acclaimed contemporary Korean artists were also on display from different galleries across the Messe Basel, the venue for the annual art fair here.

New York’s Lehmann Maupin was one.

It showcased Do Ho Suh’s 2015 work, “Myselves,” which he created with colorful threads embedded on cotton paper while working on his residency at the Singapore Tyler Print Institute.

The piece sold for up to $100,000 on the first day, but it is just one of a few from Suh available with the gallery, which has also represented works by installation artist Lee Bul.

“Collections by artists like Do Ho Suh, we just sell instantly. I wish we had more,” one of the curators at the gallery said.

Suh is most well-known for his installations.

The curator noted that Korean art has reached a stage where defining it under a single category is nearly impossible, nor wanted.

“It may be inappropriate to lump together all Korean artwork as Korean because they now transcend borders and are so diverse.”