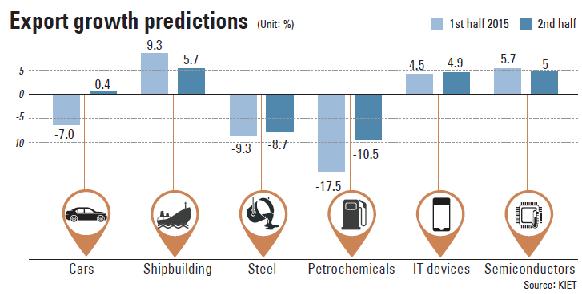 KIET’s outlook for the country’s economy and industry said the GDP will increase by 2.9 percent from a year earlier as Korea is expected to overcome its recent struggles with exports in the second half of the year. The domestic market is also expected to improve little thanks to low international oil prices and low interest rates.

But KIET said the country’s overall economy is still being hurt by weak exports and increased household debt. It said a 2.9 percent GDP growth rate will actually represent a 0.4 percent drop from a year earlier when the GDP increased by 3.3 percent from 2013.

Major variables that could change the outlook were a raise in interest rates in the U.S., continued slowing of China’s economic growth, as well as the impact of Middle East respiratory syndrome (MERS), according to KIET.

Benefiting from the improved trading conditions, including low international oil prices, Koreans’ consumption this year is expected to increase only by 2 percent from last year. In the second half of 2015, the figure is expected to increase 0.5 percent from the first half and by 0.8 percent year-on-year due to the impact of MERS and the government’s reflation measures.

“Gross national income (GNI) increased by 3.8 percent in 2014 from a year earlier and the GNI for the first quarter of this year increased by 7.1 percent due to improved trading conditions, mainly falling international oil prices,” said KIET in a statement. “But increasing household debt and MERS could shrink consumption.”

By industries, shipbuilding and semiconductors are expected to lead the country’s export performance. Oil refining and petrochemicals are expected to report declines. IT device manufacturers and the machinery industry are also expected to have a better score sheet compared to last year.

The oil refining and petrochemical businesses are expected to perform better as oil prices have stabilized recently. Exports of ships and chips are also expected to rise by about 5 percent from a year ago. For the shipbuilders, Korean companies are scheduled to deliver LNG carriers, large-size container ships, as well as drill ships. Chip makers are expected to enjoy increasing demand for UHD TVs, wearable devices and the Internet of Things.