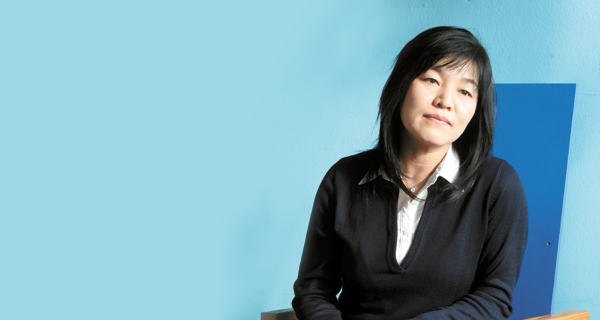 The recent plagiarism allegations engulfing star novelist Shin Kyung-sook and her 1996 short story “Legend” have widened into questions about Shin’s other works, and then into complaints about the structural problems in Korea’s literary world, which lacks impartial criticism, especially of best-selling authors backed by influential publishing houses. [JoongAng Ilbo]

The Korean literary world is in deep turmoil.

The recent plagiarism controversy engulfing superstar novelist Shin Kyung-sook has resulted in the tumbling out of other skeletons from the closet of the Korean literary publishing industry, which some have dubbed Korea’s “literary cartel.”

And more attention is being paid to how publishers, critics and authors form a sort of vicious circle and how publishing houses promote their star writers - even commissioning critics to write rave reviews.

Some of the literary magazines are published by the publishing houses themselves and the critics work as the editors of the magazines, a neat arrangement indeed. Such manufactured rave reviews are often mocked as “an officiant’s message” as in a Korean wedding, which loosely translates into a priest’s blessing.

“Reviews in domestic literary magazines that only praise works are a problem,” literary critic and Sookmyung Women’s University professor Kwon Seong-woo told the JoongAng Ilbo Tuesday. “About 90 percent of the reviews are mere praise. Reviews should be strict and fair. Only then can writers self-reflect and produce good works.”

Literary critic Kim Myeong-in, one of the most vocal observers on the issue, said such biased reviews “make writers think that they are infallible and artistically excellent, which is not good for writers.” The phenomenon is particularly common with star writers whose books are bound to sell, observers say.

The biggest problem is that over time, the Korean literary world lost the self-correcting mechanisms of true criticism and became pure commercial hucksterism, which led to the high-profile plagiarism scandal tarnishing the internationally acclaimed Shin, author of “Please Look After Mom” (2009), which has been published in 19 countries.

People who say negative things about the works being promoted by publishing houses - including those who raise serious issues like plagiarism ? are told to shut their mouths or be permanently excluded from the industry’s inner circles.

“Some people ask me why I didn’t choose a literary journal,” said novelist Lee Eung-jun, who accused Shin of plagiarism on June 16 through the Huffington Post Korea. “That’s such a naive question. Of course, I would have preferred to [make the accusations] in such a publication.

“Because it’s a matter of literature, I wanted to resolve it within literature. But reality doesn’t allow that. There is not one literary journal [in Korea] that would run an article criticizing Shin,” Lee told the JoongAng Sunday.

According to Kwon, there are many literary figures in Korea that believe that this is the last chance for Korean literature to be purified and avoid spiraling downward into the muck. “If we can’t come up with accurate diagnoses and solutions, Korean literature can hit its [bottom],” Kwon said.

Against this backdrop, Shin - who had been avoiding any press contact since her flat denial of plagiarism charges on June 17 - said in an interview with the Kyunghyang Shinmun on Tuesday that she now thinks that Lee’s accusations are valid that she plagiarized from “Patriotism” (1961) by Japanese author Yukio Mishima (1925-70) for her short story “Legend” (1996).

But her ambiguous words in the interview failed to satisfy the public, which was looking for clearer answers. 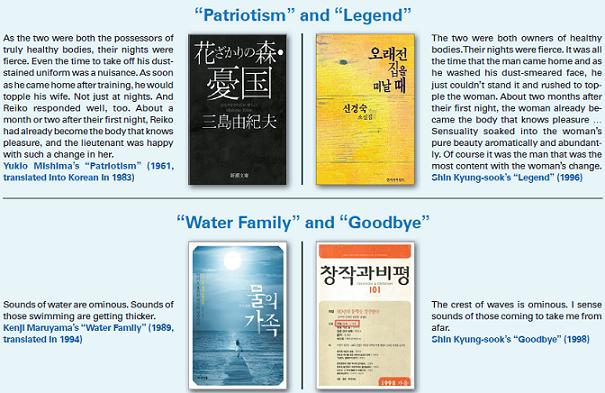 “I compared sentences from ‘Patriotism’ and ‘Legend’ numerous times and realized that accusations of plagiarism are valid,” Shin said in the interview.

“I still don’t recall reading ‘Patriotism’ no matter how hard I sift through my memories, but it’s come to the point where I can’t trust my own memories,” she said. (Earlier she insisted she hadn’t read “Patriotism,” but had read another of Mishima’s works.)

The 52-year-old added that she will give up all her current positions, including a place on a jury for a literary award, for some self-reflection.

Changbi, the publishing house that published “Legend,” denied the accusations initially. But Tuesday it said it will stop distributing “Potato Eaters” (1997), a collection of Shin’s stories including “Legend,” and the current stock in bookstores will also be recalled.

In addition, Changbi - which got a lot of bad press for a statement last week defending Shin and even attempting to trivialize the incident - said it will touch on the recent discussions of an incestuous literary community in its literary journal in the fall and possibly hold debates on the issue.

Some people have said Shin should stop writing altogether, but she said that’s not something she can do. “My land is literature. So if my land falters, I can only hold on to [what’s left] and stand up,” she said in the interview with the Kyunghyang Shinmun. “I will let go of the things I can. But I will go back to my desk - even if I don’t release my works and put them in a pot.”

In the history of Korean literature, both Changbi and Shin Kyung-sook hold important places.

Until the 1980s, Korean literature was dominated by two schools of thought: Realism and modernism. Changbi published books in the former school while Moonji Publishing Company was dedicated to the latter. Changbi has been one of the most influential publishing houses in Korea since then.

As for Shin, she represents the generation of writers from the 1990s who delved into rediscovering everyday lives and internal selves, as opposed to the previous generation whose works were largely political, a reflection of the democracy movement in Korea in the 1970s and 1980s.

It was also in the 1990s that unconditionally positive reviews started appearing in literary magazines.

Back then, they performed a defendable function: To give chances to new faces and new voices.

But with the dawn of the new millennium, some Korean literary figures began to see the dark side of these reviews.

“Interpretations without criticism brings fatal poison to writers, like cliches, stagnation and arrogance. … And at the end awaits the grave of criticisms, the grave of novels,” Kim Myeong-in wrote in “Beyond Officiant’s Criticisms,” which he and eight others co-authored in 2002.

Through the book, the authors harshly criticized the “cartel” formed by writers, critics and publishers, saying commercially motivated praise “led to the absence of criticism and the legend of Shin Kyung-sook novels was born.” They wrote that “the publishing of literature became commercialized and critics are part of the publishing industry’s capital.”

Kwon of Sookmyung co-authored a book called “Literature Power” in 2001 pointing to Korean literary circles’ structural problems. “The problems I raised then were not fully discussed and awkwardly stitched up,” he said in an interview with the JoongAng Ilbo. “Shin’s plagiarism controversy is the blowback of that. When problems are not solved, they almost always come back in an exacerbated form.”

Literary critic Oh Chang-eun pointed out that “before, publishing houses worked hard to acquire their own literary color, but now profits overrule everything else.” He added, “As long as literary criticism only functions in accord with publishing houses, Korean literature’s voluntary verification process will continue to be absent.”

This is a posting by a Korean netizen that’s getting a lot of attention on the Korean Internet lately, as debate over plagiarism intensifies in Korea.

Concerning Shin’s “Legend,” there were voices saying it cannot be defined as plagiarism. Baek Si-jong, chairman of the Korea Novelists’ Association said, “Adding poetic expression or emotional phrases they like is up to the writers,” adding “in a novel that’s more than 1,000 pages long, raising the issue of five to six lines is just being petty.”

There is no exact standard in Korea as to what constitutes plagiarism in literature.

Kim Chang-dong, head of the legal research team at Korea Copyright Commission, said, “No specific criteria is cited in any clause in Korea’s copyright law, like how many words or how many sentences that overlap constitute plagiarism.”

He said whether or not copyright is infringed upon is determined by a court circumstantially by two things: One, the possibility that the writer read the original work, and two, how similar the two pieces are.

This differs from the Korean music industry and academia, which have come up with their own guidelines for plagiarism. For music, it’s considered plagiarism if two measures are the same, and in academia, if six or more words in a row are the same, the work is deemed plagiarized.

Experts say with Shin’s case, the Korean literary world should at least seek come up with a stricter definition of plagiarism, as well as an ethics code and punitive measures after consultations with legal professionals.

Observers also suggest that there should be at least three literary magazines that are independent from commercial publishing houses.

“An ethics investigation team should be formed to publish a white paper that comprehensively details plagiarism activities so far,” Kwon said, “so that we leave records and data that will become a positive pressure for the future generations.”