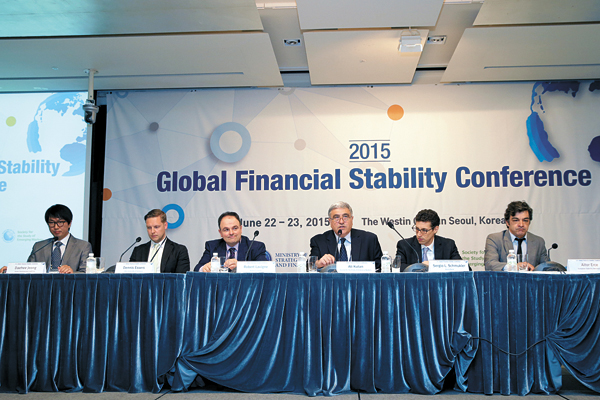 Economists meet at the Global Financial Stability Conference 2015 on Monday in central Seoul. Provided by the Korea Development Institute

Should the Korean central bank reduce further record-low interest rates to boost the economy or raise them to prevent an exodus of foreign capital once the U.S. Federal Reserve raises interest rates later this year?

Former Bank of Korea Governor Kim Choong-soo has stressed the need for flexibility in monetary policy and stronger financial networks with neighboring countries to fight against uncertainty and instability.

“International monetary systems are no longer determined by a unitary globally cooperative equilibrium [controlled mainly by the United States], but the system has recently gotten more complex and uncertain with multiple region-wide equilibria coexisting,” said Kim, a visiting professor at the University of Pennsylvania.

Kim was in Seoul on Monday to attend the Global Financial Stability Conference, organized by the Ministry of Strategy and Finance, the Korea Development Institute and the Society of Emerging Markets.

“Because the United States, European Union and Japan are all following through with their own decisions [when it comes to monetary policy], Korea should act responsively and flexibly to make decisions quickly after our main trade partners lower their interest rates,” he said. “Because the global financial markets have gotten much more complex, and they change much faster than in the past. Even the world’s largest economy, the U.S., can’t make its own ‘my-way’ kind of decision when it makes monetary policy decisions.

Kim explained that emerging economies, including Korea, should admit that they can’t avoid the impact of U.S. interest rate hikes, and that a hasty response on the domestic policy level to counteract an exodus of foreign capital may impact their neighbors.

Regional cooperation on financial stability can be a solution, he said. In the process, the roles of monetary policies and central banks must be strengthened in emerging markets in order to mitigate the impact from interest rate hikes.

That would help each emerging market fight against excessive conditionality pushed by international organizations, Kim said. As an example, he mentioned Korea borrowing from the International Monetary Fund (IMF) after the Asian financial crisis in 1997.

Other economists from international organizations and universities at the Seoul meeting emphasized that Asian economies, including Korea, won’t take too much of a hit much from the United States raising interest rates in the second half of the year or in 2016.