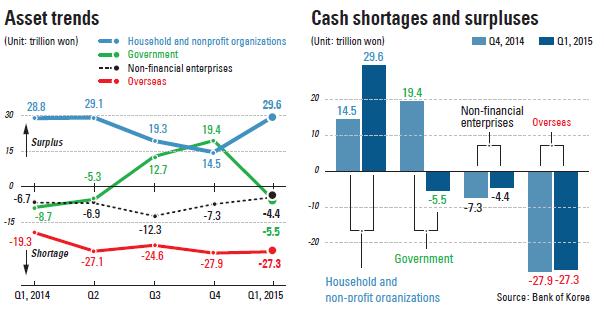 Korean households are not spending but simply saving the money at banks, due to unstable economy, rising spending on housing and expediting aging society.

This was the highest level in the past three years, higher than 31.5 trillion won in the first quarter of 2012.

The national funds circulation data shows the capital status of each economic units, including households, corporations and governments, whether they are short of money or have surplus.

Korean households created new debts worth 14.1 trillion won in the first three months of this year, but earned 43.7 trillion won during the same period. This means the households actually have extra funds of almost 30 trillion won.

“Korean households saw their income rose in the first quarter this year compared to the past few quarters, which allowed them to have the size of household asset surplus to expand,” said Kim Sung-joon, head of economic statistics department at BOK.

They ended up with extra money, but didn’t do any investment activities. They simply stocked them in bank accounts, insurance or pension programs.

Of 43.7 trillion won earned during the first quarter, about 23.4 trillion won has been installed in commercial banks’ regular savings and installment savings accounts, while other 20.2 trillion won have gone to insurance and pension programs.

The BOK said, Korean households saved almost 36.5 percent of the remaining money, after spending on necessary purposes. This rate was the highest in the past 17 years, following the 37.2 percent in the third quarter of 1998.

Meanwhile, the government and corporations faced a shortage of money during the first quarter, as external investments and loans exceeded their own income. The government was short of about 5.5 trillion won, while non-financial companies were of 4.4 trillion won.