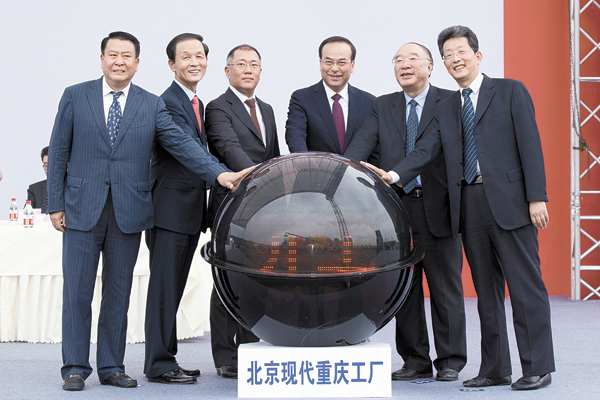 The company said its Vice Chairman Chung Eui-sun represented the company instead of his father - Hyundai Motor Group Chairman Chung Mong-koo - at the groundbreaking ceremony. The elder Chung had to cancel his three-day trip to China due to a cold.

The chairman wanted to visit the Chinese market, where the company’s sales have struggled recently.

Along with the vice chairman, about 600 Hyundai executives and VIPs including Xu He Yi, board chairman of Bejing Hyundai Motor, Kim Jang-soo, Korean ambassador to China, and Sun Zheng Cai, Communist Party chief of Chongqing, attended the ceremony.

The nation’s leading car manufacturer hopes the facility will increase its share in China, as Chongqing is the only city located in the west among the four under the direct control of the central government. The other three cities - Beijing, Shanghai and Tianjin - are located in the southeast.

“It is our pleasure to build a production plant in Chongqing, which is being developed as China’s new growth engine,” said Vice Chairman Chung.

The plant will have facilities for engines, car body platforms, and painting on a land of 2 million square meters (494 acres) with a total production capacity of 300,000 units per year by the end of 2017.

After the completion of this plant, along with a fourth plant under construction in Changzhou, the company will have a production capacity of 2.7 million cars per year in China, which the company expects to improve its competitiveness against Volkswagen and GM, its biggest regional competitors.

The Chinese sedan market is predicted to grow up to 23 million units in 2018 and the demand for cars by Chinese consumers is expected to grow by an average of 8 percent in next four years, according to the company.