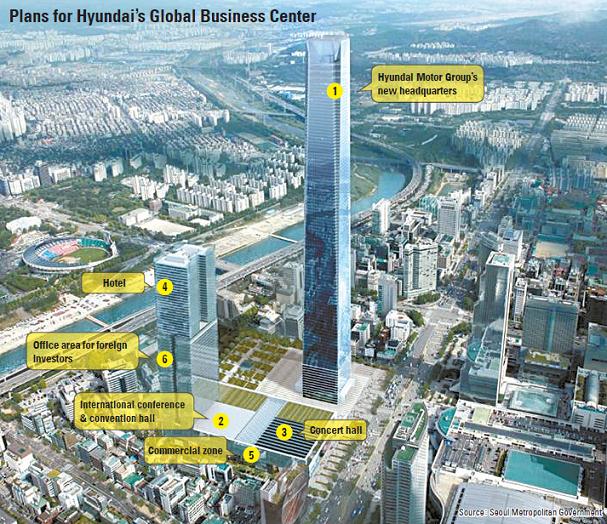 Hyundai Motor Group is moving ahead with its plan to build a car business hub on the Samseong-dong land it purchased from the state-run electric company Korea Electric Power Corporation (Kepco).

The company said it started negotiations with the Seoul Metropolitan Government on Tuesday to build its Global Business Center (GBC) at the site of the 115-story building in southern Seoul.

In order to build the GBC, the municipal government must rezone the designated residential area as commercial. The company submitted its final draft for the GBC on June 11 that included a proposal to donate 1.703 trillion won to the city government.

The biggest issue between Hyundai and the city is the amount of the donation, which the government calls a “public contribution,” referring to a company paying the local community compensation for taking a public property.

In the first draft, Hyundai suggested a contribution of 1 trillion won, which was rejected by the city government.

The adjusted amount is 36.75 percent of the estimated value of the Samseong-dong land.

“The 1 trillion won offer was made by Hyundai, but we couldn’t accept it because the amount didn’t fully reflect the development plan for the land,” said Kim Yong-hak, a spokesman for the city government’s urban regeneration headquarters. “What we will carefully look into during the negotiations is potential things that could occur during construction of the skyscraper and whether such elements are appropriate for designating the Samseong-dong plot as a commercial area.”

Industry insiders say the negotiations won’t take long, as the company is willing to provide any measures the city government asks for and the government wants the project launched as soon as possible to create jobs and energize the economy.

Hyundai Motor Group executive Kim In-soo, who is in charge of the GBC project, wants to wrap up the negotiations and the necessary paperwork by the end of next year and begin construction in early 2017.

“Completing the GBC project will definitely help in carrying out other related civil and public business since it is one of Seoul’s core projects to develop an international [commercial and cultural] exchange complex,” said Lee Je-won, head of the city government’s urban regeneration headquarters. “We will closely cooperate with Hyundai Motor Group to efficiently complete administrative work to create jobs and help the local economy.”

A study by the Korean Urban Management Association estimates the GBC will create 1.3 million job opportunities and have a 262.6 trillion won ($237 billion) production inducement effect over the next 20 years.

Besides the negotiations, Hyundai Motor Group jumped onto other work to plant the brand of Hyundai on the Samseong-dong plot. It said it will soon decide on the design for the GBC. The company held a design contest last year, and the 14 entries were recently narrowed down to three finalists.

The company added that it will pay 10.55 trillion won by Sept. 25 to acquire ownership of the land.

Ahead of making the third and final payment, Hyundai is trying to plant the company’s identity on the Kepco building, removing the name and sign of the electric company from the wall. It plans to put up the sign of Hyundai Motor Group as soon as next month.

“About 900 Hyundai employees are working at the [Kepco] building and we thought it would be fine to let them put up their signs since they will own the place soon,” a spokesman for Kepco said.

The number of Hyundai Motor Group employees working in Samseong-dong has been increasing as some affiliates, including Hyundai Glovis and Hyundai Special Steel-Construction, moved into the Kepco building in February and the Seoul office of Hyundai Steel moved there in April.