MERS super-spreader is discharged from hospital

MERS super-spreader is discharged from hospital 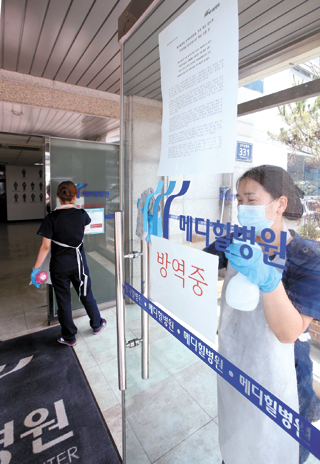 Medical workers of Mediheal Medical Center in western Seoul sterilize the premises on Tuesday as a complete shutdown of the hospital was lifted earlier that day. The Seoul Metropolitan Government previously sealed it off after a patient was found to have been treated at the hospital for three days. By Oh Jong-taek

Patient No. 14 of Korea’s Middle East respiratory syndrome (MERS) outbreak, a super-spreader who infected 81 other people, has fully recovered and was discharged from the hospital Tuesday after 23 days in a negative-pressure quarantine room.

After catching the disease from Patient No. 1, another super-spreader, at Pyeongtaek St. Mary’s Hospital, the 35-year-old infected other patients at Samsung Medical Center’s emergency ward, where he stayed for three days, along with relatives of patients and medical workers. Eleven of those people died.

Although it was Patient No. 14 who made the hospital, one of Korea’s best, the second ground zero for MERS after Pyeongtaek St. Mary’s, it’s debated whether he should be blamed.

“He is an attacker and a victim at the same time,” said Lee Dong-wu, a professor of psychiatry at Inje University Sanggye Paik Hospital. “It is only regretful that he didn’t wear a mask all the time and he moved around the hospital.” 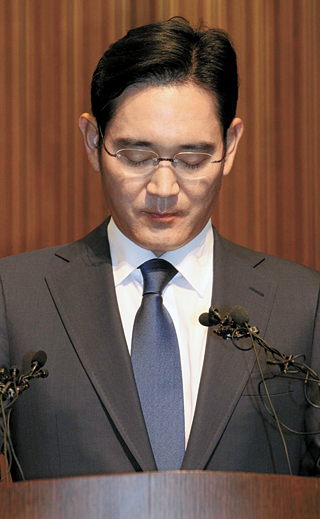 Patient No. 14 was treated for pneumonia from May 10 to 20 at Pyeongtaek St. Mary’s Hospital in Gyeonggi, where Patient No. 1 infected more than 30 people. He contracted the disease on a business trip to the Middle East.

“He was at St. Mary’s Hospital but did not get well, so he stayed at Good Morning Hospital for three days and then moved to Samsung Medical Center on May 27,” Patient No. 14’s father told the JoongAng Ilbo.

After three days at Samsung Medical Center, the health authority finally notified the general hospital that he should be quarantined because he stayed at St. Mary’s Hospital.

While at Samsung, Patient No. 14 was hooked up to a respirator and did not know about what was happening outside his room. He saw news that Patient No. 14 infected many people but did not know that was him. Medical workers were concerned that the news would bother him, so they didn’t tell him.

It was only a few days after he got better that he realized he had infected others in the emergency ward. People who saw him said he was somewhat calm after hearing the news and felt sorry for those who he had infected.

“He had a few tests before being discharged on Monday and he looked shocked when workers seemed to be avoiding him,” said a medical worker. “I guess he needs to be treated for his trauma as well.”

Meanwhile, on Tuesday, three more confirmed MERS cases were reported and the total number of the country’s MERS cases climbed to 175. No new fatality was announced.

Patient No. 173 is a private nurse of a patient at Kyung Hee University Hospital in Gangdong District, eastern Seoul, who came into contact with Patient No. 76 on June 6. The university hospital is one of two hospitals Patient No. 76 visited after she contracted MERS.

The health authorities are still conducting epidemiological investigations on Patients No. 174 and 175. Patient No. 174 is an outpatient of Samsung Medical Center who visited the hospital on June 4, 8 and 9. Patient No. 175 is a relative of Patient No. 118.

“Samsung Medical Center has caused too much pain and anxiety to people, and I give my deepest apology for that,” Lee said at a press briefing held Tuesday at the company headquarters, “especially to those who died of the disease, their relatives, other patients and those who are unexpectedly under quarantine.

“My father has also been at the hospital for more than a year, so I understand the pains and fear of patients and their relatives to some extent.”

Chairman Lee had a heart attack in May 2014 and has been treated in a VIP hospital room of Samsung Medical Center since.

“We will cooperate with the health authority and give our full support to end the outbreak as soon as possible,” Lee continued. “We will thoroughly investigate how this happened and do our best to prevent the same thing from happening.”

Song Jae-hoon, a director of the hospital, also apologized.

“We should have activated our crisis management system for the worst case scenario at an early stage,” Song said. “As we lacked information, we lost some patients and we feel deeply sorry for that.”

Samsung Medical Center is establishing a renovation committee that will assess the hospital’s crisis control measures and overhaul its systems.