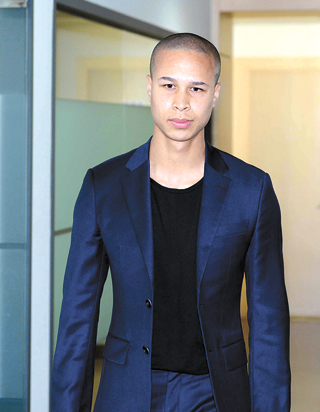 The Korean sports community has been shaken recently by several doping cases involving star athletes, raising doubts about whether the country’s anti-doping program is working.

Olympic gold medalist swimmer Park Tae-hwan is currently serving an 18-month ban by FINA, the international governing body of the sport, after testing positive for testosterone. The 25-year-old Park claims a doctor gave him an injection without telling him what it was, and he has filed a lawsuit alleging professional negligence.

While Park’s doping suspension was a stunner, another doping case shocked football fans this month.

Jeju United forward Kang Soo-il was suspended on Monday for 15 matches following a positive drug test. He is the first K-League player to test positive for a banned substance.

For many, the case of Kang is more disappointing and sad.

Kang, who has an African-American father and Korean mother, was originally included in the national football team’s roster for the 2018 FIFA World Cup Asian qualifiers against Myanmar on June 16. The 27-year-old had the chance to become only the second mixed-blood footballer on the national team, but his dream to debut as a Taegeuk Warrior was dashed because of mustache-growing cream.

Apparently, the cream contained methyltestosterone, a type of steroid, but Kang didn’t know it could be a problem. K-League disciplinary committee members acknowledged Kang doesn’t seem to have intentionally violated doping rules. When the Korea Anti-Doping Agency took a urine sample in May, the former Incheon United FC and Pohang Steelers player reported to officials he was using the cream.

He not only faces a 15-match ban from the K-League, but will receive separate punishment from the Korea Football Association (KFA). This means that the forward will not be allowed to play in matches organized by the KFA, including the FA cup.

The K-League penalties are a 15-match ban for the first violation, a one-year suspension for the second and a lifetime ban for the third.

Just a day after Kang’s punishment was announced, the Korea Volleyball Federation announced that Heungkuk Life Pink Spiders left attacker Kwak Yu-hwa had tested positive for phendimetrazine and phenmetrazine, a type of stimulant drug, and has been suspended for six games.

The federation said Kwak’s test was conducted during the 2014-15 V-League season in April and the 21-year-old’s A-sample and B-sample both tested positive.

The former Korea Expressway Corporation Hi-pass Zenith player appeared before the disciplinary committee on Tuesday and explained she didn’t take the banned substance on purpose, saying the oriental medicine given to her by her mother seemed to be the problem.

It may be unfortunate for Kang and Kwak, but doping violations can’t be reversed. The first responsibility, of course, is on players themselves.

However, there seems to be a need for teams and governing bodies to reinforce anti-doping programs. An official already acknowledged the K-League’s anti-doping education program doesn’t address cream, focusing instead on injections and pills.

Kang said he received the mustache-growing cream from as friend and Kwak said she just had oriental medicine from her mother. But what seems to be crucial is the need for a system where any substance recommended by others is evaluated by team or league officials to determine whether it contains a banned substance.

Doping not only ruins careers, but threatens entire sports. Small steps could go a long way toward preventing further doping cases and be a starting point for better anti-doping education.