Gov’t to spend $14B extra budget

Gov’t to spend $14B extra budget 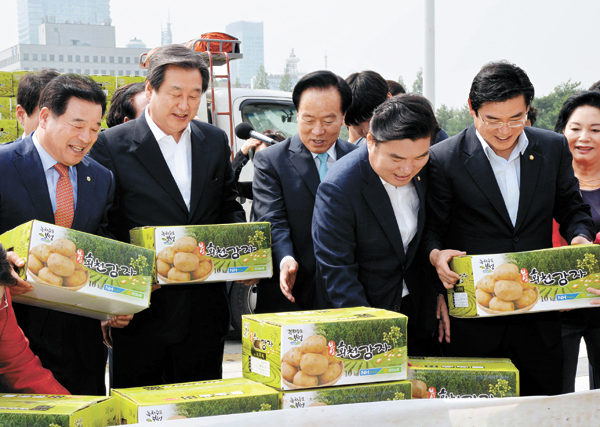 Saenuri Party leader Kim Moo-sung, second from left, members of the ruling party and regional government officials bought boxes of potatoes from Boseong, South Jeolla, at the National Assembly in Yeouido, Seoul, as part of a campaign to help farmers in MERS-affected regions.[NEWSIS]

The government is preparing a supplementary budget of up to 15 trillion won ($14 billion) to boost the local economy after the outbreak of Middle East respiratory syndrome (MERS).

Yoo Seung-min, floor leader of the ruling Saenuri Party, told reporters Wednesday that a rough amount for the supplementary budget was discussed between the government and the ruling party on Tuesday.

“The detailed budget allocation plan still has to be submitted from the government,” Yoo said. “The order of policy planning has been reversed, as the government determined the total budget even before planning where to spend it.

“The supplementary budget wouldn’t have happened if there were no MERS outbreak,” he added. “[At the Tuesday meeting] I got the impression the government isn’t ready at all when it comes to deciding where exactly to spend the money, whether it’s a response to MERS, the drought or sagging consumer sentiment in general.”

On Wednesday morning, the Ministry of Strategy and Finance denied a JoongAng Ilbo report that it was planning a 15 trillion won supplementary budget package, saying the exact amount and details of the budget hadn’t been decided.

The government’s announcement of its economic policy direction for the second half will be made Thursday, and the size of the supplementary budget is slated to be confirmed at a joint meeting of the government and ruling party.

“In the second half, the Korean economy needs the early execution of a supplementary budget,” said a statement released Wednesday by the Korea Chamber of Commerce and Industry (KCCI). “By releasing enough money, the government should give a positive sign to the market and consumers so that consumer sentiment stabilizes before the economy shrinks further.”

The KCCI also rolled out its own policy proposals Wednesday asking the government to consider implementing deregulatory policies; to push temporary changes to its tax policies for both businesses and consumers to revitalize consumer sentiment in the wake of the MERS outbreak; to push structural reform for the medical and other service industries; and to set up a detailed risk management plan to prepare for the U.S. Federal Reserve raising interest rates in the next few months.

The KCCI said it hopes the government will help MERS-stricken businesses by postponing the deadlines for value-added tax payments and delaying scheduled tax audits for sectors like tourism, leisure and entertainment, and dining.

Simplifying customs and tax refund processes would also help bring back foreign tourists scared away from Korea by MERS.

The KCCI pointed out that the MERS crisis showed the weaknesses of hospitals and said “overall medical fees should be raised and the regulations should allow hospitals to establish medical corporate bodies, ease rules on opening medical hotels and the medical tourism businesses.”

“Capital markets in emerging economies including Korea are likely to be influenced by the U.S. Fed raising interest rates, also causing interest rate burdens on local households and companies,” said Shin Kwan-ho, an economics professor at Korea University and policy adviser to the KCCI. “The Korean government should set up contingency plans to prepare for the worst-case scenarios.”

As there have been growing expectations that the government will finally announce a supplementary budget, the main bourse has been enjoying a bullish rally that has continued for six consecutive trading days.