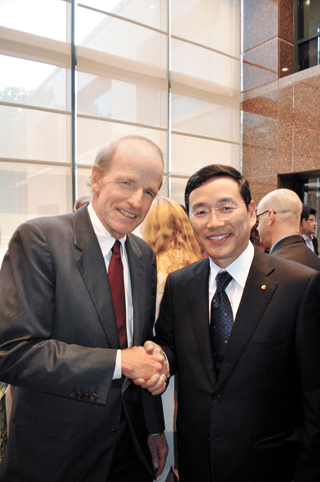 Opponents had said the building would ruin views of the Palisades, a 200-million-year-old stretch of rocky wilderness above the western shore of the Hudson River. The new design will retain the project’s scale while protecting views of the Palisades, LG said in a statement Tuesday. Under the settlement, the conservation groups agreed to withdraw litigation challenging zoning approvals.

“Preserving the cliffs and these majestic Hudson River views more than a century ago marked an early milestone of the conservation movement in America,” Mark Izeman, a director at the Natural Resources Defense Council, said in the statement. “Today’s agreement shows we can keep this tradition alive in the 21st century when we work together to find common ground.”

Laurance Rockefeller, an environmental lawyer whose family donated the land 80 years ago that became the basis for Palisades Interstate Park, was a participant in the settlement discussions.

The new design for the building calls for a five-story north wing almost 70 feet high and a three-story south wing. LG will also use landscape, lighting and other design features to reduce visual impact on the park, a National Natural and Historic Landmark.

The new 360,000-square-foot campus will allow the Korean company to double local employment to more than 1,000 people by 2019. The project will replace several buildings that LG, the world’s No. 2 television maker behind Samsung Electronics, currently uses in Englewood Cliffs.

The project has been in the works since 2009, but it was delayed by two lawsuits challenging the zoning approvals granted by New Jersey, Bergen County and the borough of Englewood Cliffs.

The plaintiffs said Englewood Cliffs wrongly gave permission for LG to build a 143-foot tower in a borough that caps building height at 35 feet.

Both suits were dismissed by a New Jersey Superior Court judge in August 2013. That decision was on appeal.