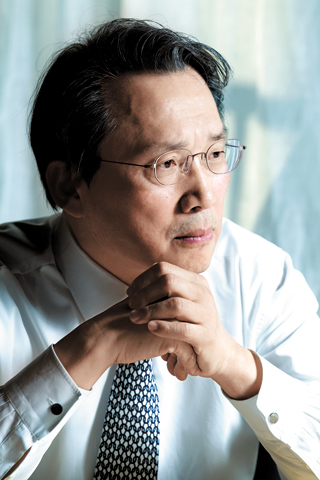 A disgraced former presidential aide is making a comeback as chairman of a tech company at the center of a consortium trying to buy troubled smartphone maker Pantech.

It was announced Wednesday that Byeon Yang-kyoon has joined Optis, an optical disk drive manufacturer leading the consortium that expressed interest in acquiring Pantech earlier this month as a court prepared to begin the liquidation process.

Once a popular manufacturer, Pantech was on the verge of collapse with more than 1 trillion won ($903 million) in debt after a series of failed sales attempts.

Byeon was chief secretary of national policy in the Roh Moo-hyun administration before he resigned in 2007 after an affair with a museum curator. Since then he had kept a low profile.

Media outlets reported Optis approached Byeon because of his government connections and experience running an IPTV business in Indonesia.

The founder and CEO of Optis hopes to shift the business focus of Pantech toward selling budget smartphones in developing Asian countries.

The company has two factories in the Philippines producing optical disk drives.

The Seoul Central District Court announced on June 16 that a consortium led by Optis signed a memorandum of understanding with Pantech. Also part of the consortium is EMP Infra Asia, an investment management company.

Under the agreement, the two sides are scheduled to sign a contract by July 17, after Optis completes due diligence.

Although the court approved the preliminary agreement, the deal is far from a sure thing.

The two sides must agree on price and employment issues. For example, Optis wants to hire only some of Pantech’s workers.