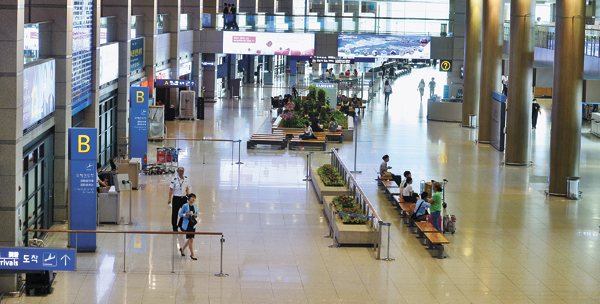 Incheon International Airport resembles a ghost town on June 18, as the outbreak of Middle East respiratory syndrome (MERS) has slashed the number of tourist arrivals. [NEWSIS]

Retailers and hospitality businesses alike say June has been a bad month so far, and July and August could very well be worse.

The outbreak of Middle East respiratory syndrome (MERS) has dealt heavy blows to retailers and hospitality businesses, with fears over the disease sending the number of foreign tourists into a downward spiral.

Lotte Duty Free said its central Seoul store saw a 30 percent drop in sales for the month through June 22, compared to the same period the previous year. “Sales in June were bad, but we still had a thin stream of tourists who didn’t cancel their trips to Korea coming in,” said a Lotte Duty Free spokesman. “We’re more worried about July and August because that thin stream may stop altogether. We’ve heard [tour] reservations simply aren’t being made.”

Many of the shoppers there were locals headed for summer vacation overseas.

“At this time of the year, it was hard even to walk around because there were so many foreign tourists,” said a translator who works at the duty-free shop. “But from this month, their numbers have trickled down.”

A Chinese woman who came to Korea for a study abroad program was wearing a face mask as she browsed through merchandise.

“My family is worried about me,” she said, “and my friends who planned to come visit me this summer have called it off.”

The place typically bustles with Chinese shoppers and store clerks calling out loudly in Chinese to draw the attention of tourists.

Cosmetic shops along the main alley’s entrance were nearly empty, and many store clerks stood around with bored looks on their faces.

“The number of shoppers dropped by about 80 percent this month compared with the seasonal average,” said a clerk at Banila Co.

According to the Korea Tourism Organization, the number of foreign tourists who have canceled trips to Korea tops 130,000.

HSBC said in a recent report that the number of Chinese tourists visiting Korea will continue to drop through August, a peak season that accounts for about 35 percent of the year’s Chinese tourism.

Lotte Hotel said it has seen a 15 percent cancelation rate from June 1 to 22, and sales this month are down 30 percent year-on-year.

“We are not receiving many reservations for July and August. Those months used to be a busy season with heavy tourist traffic,” said a Lotte Hotel official. “The biggest concern is that this could become a longer-term trend, continuing well into the remainder of this year.”

The Westin Chosun Hotel, located within walking distance of Lotte Hotel, appears to have fared a bit better due to a high proportion of business guests.

“Many of our guests are here on business trips, so it’s a bit different for us,” said a Westin Chosun Hotel spokeswoman. She added, however, that the initial cancellation rate right after the MERS outbreak had been as high as 50 percent.

“Although the number of guests has come down a bit, it’s not so drastic,” she said. “We’re also planning to come up with new strategies to get through this phase.”

There were 179 confirmed MERS cases in Korea as of Wednesday. Twenty-seven patients have died and at least 3,100 people remain quarantined.