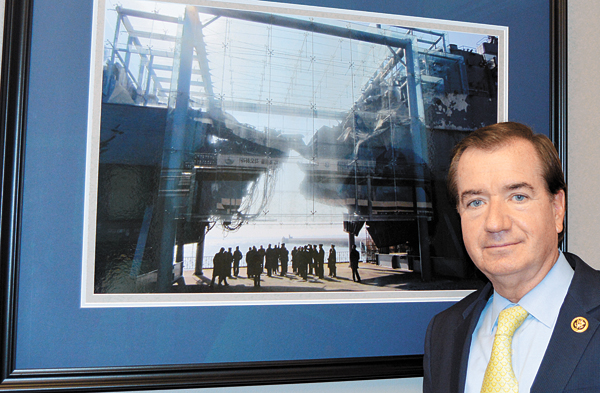 U.S. Rep. Ed Royce, chairman of the Committee on Foreign Affairs, said that a formal apology from Prime Minister Shinzo Abe to all the women forcibly recruited into sexual slavery during World War II “would go a long way” in mending the relationship between Korea and Japan.

Rep. Royce, a 12-term Republican congressman from California, has long been a strong defender of the cause of the surviving victims, euphemistically referred to as “comfort women,” and the issue of Korea’s sovereignty over the Dokdo islets in the East Sea.

“That is in part why I have urged him to issue an apology this August,” he continued in a written interview with the JoongAng Ilbo last week.

“Japan’s claim on Dokdo has also significantly hampered stronger relations,” he added. “I would urge the government to recognize the island as Korean territory.”

Q. June 25 marks the 65th anniversary of the beginning of the 1950-53 Korean War. Do you have anything that you would like to share with the younger generations in both countries on the alliance that has been built up since North Korea’s invasion in 1950?

A. This is a partnership that was forged in blood, and it is vitally important that we never forget the shared sacrifice of our servicemen. In the U.S., the Korean War is often called “The Forgotten War.” I have long tried to stress the history between the U.S. and Korea, how our servicemen fought shoulder-to-shoulder to help keep South Korea free. Our younger generations should take note of this history.

Earlier this month, two surviving former Korean comfort women passed away. Do you think Japanese Prime Minister Abe still has an opportunity in August to issue an apology?

It is a great tragedy that Kim Oi-hwan and Kim Dal-seon passed away without ever having received the apology that they so deserved. The suffering that these women endured is unthinkable.

That is why I joined my colleague, Rep. Mike Honda, in writing to the Japanese ambassador to urge the government of Japan to address outstanding historical issues. I was deeply disappointed that Prime Minister Abe failed to do so, and I would strongly urge him not to miss his next big opportunity to offer an apology to all comfort women on the anniversary of the end of World War II this August.

The U.S. and Japan have an important partnership, but that does not come at the expense of relations with South Korea. In an increasingly dangerous neighborhood ... we should strive to improve relations between countries that share common values like democracy and open markets.

Many say Korea and Japan should work toward better relations. What should we do?

I agree that it is important for South Korea and Japan to build a stronger relationship. Both countries share common values, be it respect for rule of law, democracy, or commitment to open markets. The region would greatly benefit from a thaw in South Korea-Japan relations. A formal apology to all comfort women and a recognition of historical issues from Prime Minister Abe would go a long way to mend this relationship.

What do you think of the possibility that a provocation from North Korea is imminent? How do you assess Kim Jong-un’s North Korea compared to that of his father?

[Intercontinental ballistic missile tests] and nuclear tests have been notoriously difficult to predict, but we know that Pyongyang has traditionally used these tests as well-timed tools of provocation. Top officials in both the U.S. and South Korea don’t believe a fourth nuclear test is imminent, but there should be little doubt that it’s a matter of when, not if Kim Jong-un will conduct another test.

It’s worrying that Pyongyang will reportedly have a nuclear arsenal of up to 100 devices in the next five years. Whether it’s father or son, the goal of the Kim regime has long been to secure its survival through concessions made following these provocations. We need to end this cycle through sanctions.

President Park Geun-hye recently postponed her visit to the United States. Do you think this will have any negative effects in our bilateral relationship?

I do not think that President Park having to postpone her visit due to the [Middle East respiratory syndrome] outbreak will have any negative effects on our partnership. We very much understand her need to deal with the situation at home and look forward to welcoming her to Washington in the near future.