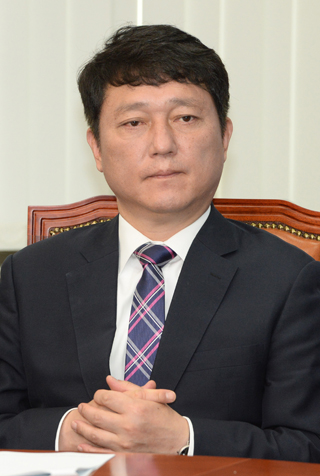 The main opposition party appeared to be on the brink of an internal war on Tuesday after its chairman appointed his political ally as the party’s secretary-general, a powerful position that can influence the nomination process for next year’s legislative election.

Moon Jae-in, the leader of the New Politics Alliance for Democracy (NPAD), appointed Rep. Choi Jae-sung as the party’s new secretary-general. Choi, a three-term lawmaker representing Namyangju A in Gyeonggi, is considered one of his allies and both share an allegiance to the late President Roh Moo-hyun.

Roh, who served as the president from 2003 to 2008, is a liberal icon, and his loyalists inside the NPAD are often referred to as being part of the pro-Roh faction.

But tensions between this faction and other party members have snowballed since Moon was elected as the main opposition’s chairman in February, reaching a new peak this week after he appointed Choi.

After the decision was announced, Lee made his disappointment clear.

“Until now, I had recommended Moon to open up the party’s door,” he said. “But he locked the door from the inside. A political party that does not engage will fail to expand, and without expansion, it will only face a lifeless future.”

Other senior members of the party who are not Roh loyalists also criticized Moon’s decision.

“This gives an excuse to the people who want to break up the party and create new groups,” said Rep. Park Jie-won, a loyalist to the late President Kim Dae-jung, Roh’s predecessor, whose supporters are largely older-generation voters based in Gwangju and the Jeolla region.

“The decision is a signal that a certain faction will control the leadership and that [Moon] will only go with the people whom he feels comfortable with,” Park said in a message posted on his social media account on Wednesday. “I will exchange opinions with my colleagues.”

Rep. Joo Seung-yong, who stepped down from the Supreme Council, the NPAD’s highest decision-making body, to protest the favoritism for the Roh faction, also expressed disappointment.

“Moon appeared to have a very weak understanding about the situation,” he said. “It’s undeniable that Moon represents the Roh faction, so the secretary-general, who will be responsible for the nomination process, should have been chosen from someone outside the faction. And I gave that advice to him. It was unreasonable for him to go ahead and appoint Choi, despite adamant opposition from the floor leader.”

Rep. You Seung-hee, another council member, as well as Reps. Kim Kwan-young and Park Kwang-on, who were appointed as deputy secretary-general and Moon’s chief of staff, respectively, were also absent.

The latter two individuals are known to be allies of Kim Han-gill, the former NPAD chairman who is not a Roh loyalist.

Although Moon said he wanted to appoint them to the leadership posts to promote balance and unity, Kim Kwan-young has said he was still considering the offer, hinting that he may decline it.