Recalling the push into Vietnam

Recalling the push into Vietnam 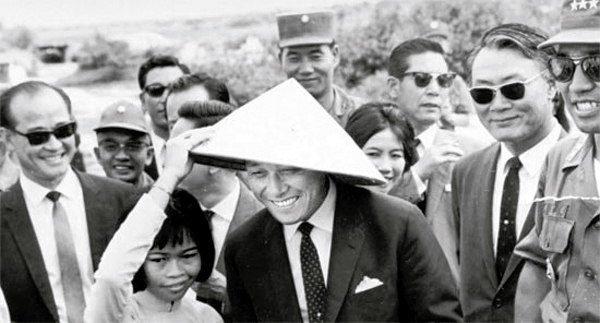 Kim Jong-pil, center, then-chairman of the Democratic Republican Party, is greeted by a South Vietnamese woman on Oct. 14, 1966, during his visit to a military unit deployed by the Park Chung Hee government to South Vietnam amid the Vietnam War. Provided by Kim Jong-pil

On Feb. 13, 1962, nine months after we carried out our military revolution, I visited South Vietnam, which was embroiled in a war with North Vietnam, as a special envoy on behalf of Park Chung Hee, the chairman of the Supreme Council for National Reconstruction. During my trip, I visited the South Vietnamese Army’s 1st division, a unit located more than 1,000 kilometers (621.37 miles) north of Saigon [now Ho Chi Minh City].

Nguyen Van Thieu, the division general at the time who was later elected president of South Vietnam and led the country until the fall of Saigon, escorted me on my visit to his frontline unit. As he pointed on the map to the 17th parallel that divided the two foes, I was reminded of the Korean War that had taken place 10 years before.

I remembered the North Korean soldiers marching past the 38th parallel, wave after wave, during their invasion and the shells that flew overhead. During the war, I lost 40 percent of my fellow military academy graduates.

The next day I met with South Vietnamese President Ngo Dinh Diem, who sought South Korea’s help in the conflict and requested that we deploy soldiers there. During the meeting, he made an official request that South Korea send troops, and all I could say was that we would consider the option once assessing the situation.

While the president had a soft smile and a gentle manner, he was a strong nationalist. I could feel a profound sense of patriotism in him. But just a year later, he was assassinated by rebel forces backed by the United States. Washington sought his removal because of its suspicions over his nationalistic ideals. The fact that the U.S. Central Intelligence Agency had acquired intelligence that Ngo Dinh Diem had tried contacting Ho Chi Minh only accelerated his doomed fate.

But as history shows, it was a big mistake on the part of the United States to do away with Ngo Dinh Diem. After his assassination, South Vietnam fell into turmoil and faced a series of coups. Its national leaders were so corrupt and heavily reliant on U.S. forces, incapable of rallying their people together to fend off the Viet Cong.

And those who took power after Ngo Dinh Diem were utterly incompetent in state affairs. Ho Chi Minh, despite being a staunch Communist, was a man of courage and strength, evidenced by his success in unifying the country in defiance of the United States.

Vietnam has taught us that freedom does not just come for us. It has to be earned through the fight. To enjoy freedom, one must have a strong resolve for it.

Upon my arrival back to Korea, I briefed Park on Saigon’s request for troop deployment. He didn’t appear excited about the idea, however, and questioned whether Korea could afford to send troops in its economic condition. He was also deeply wary over the potential and inevitable loss of young lives, let alone the fierce resistance from the opposition.

The possibility of deploying Korean troops to Vietnam was also mentioned during Park’s meeting with President John F. Kennedy in November 1961 in Washington. But at the time, Kennedy was hesitant to accept help from Seoul, as the United States wasn’t fully involved in the Vietnam War just yet.

It wasn’t until after North Vietnamese forces attacked American destroyers in the Gulf of Tonkin in 1964 that the U.S. was fully dragged into the conflict. It was after August that same year that the U.S. started asking for troops from its allies, including South Korea.

My determination that we should send troops to Vietnam only deepened over time, particularly between June and December 1964, when I went into self-imposed exile for a second time in the United States.

When I met with U.S. senators, I would tell them that Korea could fight alongside them in Vietnam. At the time, Washington struggled to persuade its allies for help in the conflict.

And I was worried that the U.S. would withdraw some of its forces in Korea to send them to South Vietnam if we decided not to help. So I came to the conclusion that the time had come for us to show our commitment to our alliance with Washington.

I told U.S. senators that they should officially demand the State Department to make an official request to the South Korean government for troops to be deployed. And in return, the U.S. government should send agricultural surpluses to South Korea at the time of year it so chose.

But the final decision came down to President Park, and military deployment would put the lives of many young men at risk.

In December 1964, U.S. President Lyndon Johnson formally requested South Korea to send forces to Vietnam, and on Jan. 8 at a cabinet meeting, Park made the final decision.

From 1965 to 1966, South Korea sent three Army divisions to face off with the Viet Cong.

And on May 1965, Park made a state trip to Washington at the formal invitation of President Johnson. Thanking Park for his decision to help the U.S. effort in Vietnam, he said he wished to show his gratitude somehow. Park asked him to allow Korean immigration to the United States as well as for help upgrading our military weapons equipment.

Park also requested his U.S. counterpart provide assistance to set up research institutes for science and technology. Washington first proposed setting up an engineering school, but we insisted on a research center, a demand that reflected our urgent need to develop practical technology that would help it feed the population, rather than basic skills taught at a higher education institute.