Time running out in ‘war’ to find remains

Time running out in ‘war’ to find remains 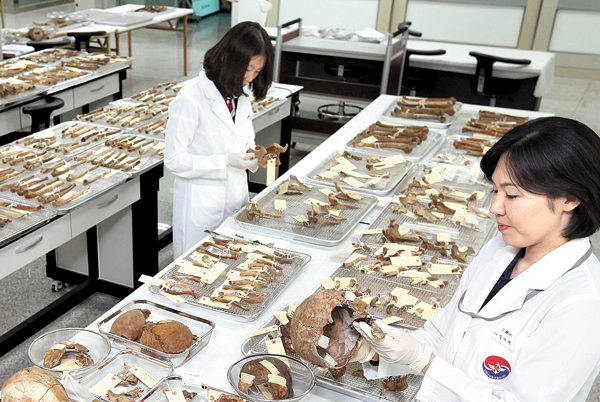 In April 2000, Eom Jeong-ho, 75-year-old widow of Staff Sgt. Choi Seung-gab, had a dream about her husband. It was first time he appeared to Eom in dream since she was notified of his death in the Korean War a half century earlier.

Choi, a member of the 17th Regiment of the Capital Infantry Division, died during a battle in Chilgok, North Gyeongsang, on Aug. 23, 1950. According to Eom, her husband told her in the dream: “If you walk along the mountain road, you can find me.”

The Army started the recovery project in 2000 for the 50th anniversary of the 1950-53 Korean War. At the end of a three-year mandate, the Army decided to continue it as a permanent mission. In 2007, the Ministry of National Defense took it over.

For members of the agency, their battle still continues as the country commemorates the 65th anniversary of the start of the Korean War June 25.

“They sacrificed their lives to save our homeland,” said Col. Lee Hak-ki, commander of the agency. “Finding their remains and returning them to their families is a duty of this country. Until we find the last one, we will do our best.”

According to the ministry, 162,394 soldiers of the Korean military were either killed or went missing in action during the Korean War. Among them, only 29,202 were laid to rest in national cemeteries, while the remains of 133,192 are still unaccounted for.

If the agency manages to excavate 1,000 remains each year, the project will take 130 years to complete. “This is a war against time,” Lee said. 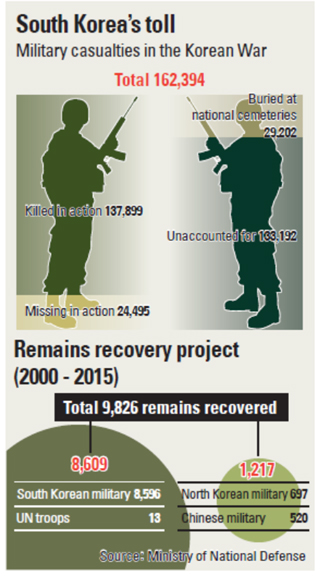 On Tuesday, examination tables at the agency’s Central Identification Laboratory, located at the Seoul National Cemetery in Dongjak-dong, southern Seoul, were filled with bones excavated recently from Cheorwon, Gangwon. Only 10 remains were intact. Most were mere parts.

“Because they were either hit by artillery or buried hastily, many parts were lost,” said Dr. Jang Yu-ryang, head of the laboratory.

The agency said it decides on excavation sites based on records of battles and testimonies of Korean War veterans and locals. It takes excavations at an average of 170 sites to recover the remains of a single solider.

After the excavations, the remains are placed in coffins made of a fine wood, which is covered with the national flag. After a ceremony, they are moved to the laboratory for identification.

The remains are cleaned, given a 13-digit identification number and then analyzed, including with a 3-D scanning process.

Some remains are identified by dog tags or dental records or personal items found at the same time, like pens or guns. 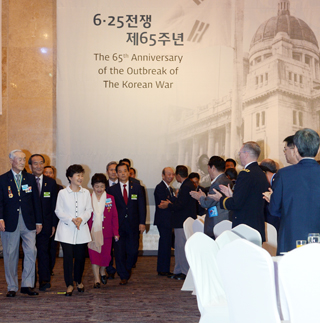 President Park Geun-hye attends a party in appreciation of war veterans to mark the 65th anniversary of the outbreak of the Korean War at the Lotte Hotel in central Seoul on Wednesday. [NEWSIS]

The agency said its biggest obstacle is a lack of DNA samples to identify the remains. Over the 15 years, the military has recovered more than 8,000 remains, but only 107 have been identified because of the lack of such a database.

For such a database, DNA samples from immediate family members of missing soldiers are a must. But few families have cooperated, even though military hospitals offer free health checkups for relatives who provide samples.

Remains that are identified are buried in the national cemetery after relatives have been informed. Unidentified remains are put in paper boxes and stored in a separate facility at 20 degrees Celsius (68 degrees Fahrenheit) and 40 percent humidity. It is a top secret facility and only a few people know the password to get access.

According to the ministry, the agency was modeled after the U.S. Joint POW/MIA (Prisoner of War/Missing in Action) Accounting Command, better known as JPAC.

“The United States and Korea are the only two countries that excavate and identify the remains of the fallen soldiers,” said Lee. “In September, officials from Vietnam will visit us to learn about our technologies.”

“This is a project to find the remains of 130,000 patriots,” said Lee. “Until we find the last one, our war is not over. Because the average age of the people who can tell us what happened on the battlefields is 84, we are working with a sense of desperate determination. We only have five years left.”