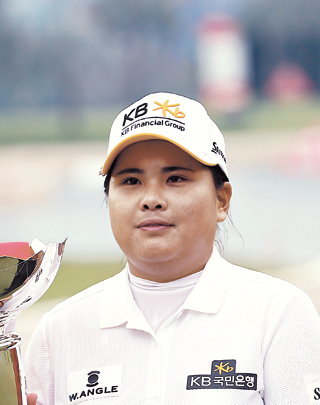 After her record-breaking win at the KPMG Women’s PGA Championship, Park In-bee aims to maintain momentum at the Walmart NW Arkansas Championship from Friday (local time).

The season’s second major tournament on June 14 gave Park three different honors. First, she reclaimed the world No. 1 spot from Korean-born Kiwi Lydia Ko. By winning her third straight Women’s PGA Championship - formerly known as the LPGA Championship - the 26-year-old also became the third player in history after and Patty Berg and Annika Sorenstam to win the same major three times in a row.

Park also surpassed Hall of Fame golfer Pak Se-ri as the Korean with the most major titles, at six.

Park now enters the Walmart NW Arkansas Championship at Pinnacle Country Club in Rogers, Arkansas, after taking a week off.

“This win actually lasted quite longer than I thought,” Park said, according to the LPGA. “Next three, four days, even when the tournament was finished, I couldn’t stop smiling. It’s because I had my family as well on my off week and everybody was just kind of enjoying it together. Yeah, just a really happy week off last week.”

Park, who has three victories this season, currently leads in wins, prize money, average score and Player of the Year points.

Entering the event as the world No. 1 could bring increased pressure, but the Seoul-born golfer said she can handle it.

In fact, this is the third time Park has been ranked as the best in the world.

“The first time I thought it was just, you know, I felt just a bit weird and it didn’t feel like my place,” said Park to the LPGA. “The second time it felt a little more comfortable, but I felt like my game wasn’t quite ready yet. But now the third time it feels like I’m really ready for this spot and my game is getting better and better every day, and I feel like I am playing like a No. 1.”

Park should feel especially comfortable this weekend since the Walmart NW Arkansas Championship is a familiar event. She won it in 2013 after beating compatriot Ryu So-yeon on the first extra hole.

The 15-time LPGA Tour winner is hoping this weekend starts a streak like it did in 2013, when she was named LPGA Player of the Year.

Park will start the round with 20-year-old Lexi Thompson from America and Sweden’s Anna Nordqvist who is coming off a win at the ShopRite LPGA Classic on May 31 and a top-10 finish at the KPMG Women’s PGA Championship.

But there will be always contenders in Park’s way.

Ko, who is now No. 2, will start fresh this week. The 18-year-old missed the cut at the KPMG Women’s PGA Championship and ended her streak of 53 consecutive starts in the LPGA. She is also familiar with the course, ending as a runner-up last year along with Cristie Kerr and Angela Stanford. She tees off with Azahara Munoz and Michelle Wie.

Stacy Lewis, the hometown favorite and defending champion, is also a possible contender. Lewis, 30, is a graduate of the University of Arkansas. The 11-time LPGA winner also won the event in 2007 as an amateur.

Lewis will play with Sandra Gal and Mariajo Uribe in the first round. She hasn’t won any LPGA Tour event since taking the Walmart NW Arkansas Championship last year.

Rookie of the Year point leader Kim Sei-young, runner-up in the KPMG Women’s PGA Championship, will tee off with Cristie Kerr and Jessica Korda. Kim, who has two wins this season, is also No. 2 in prize money and Player of the Year points behind Park.

Kim Hyo-joo will not play, having decided to rest after the 29th Korea Women’s Open in Incheon last week. She will play in the Kumho Tire Women’s Open in China next week as its defending champion.