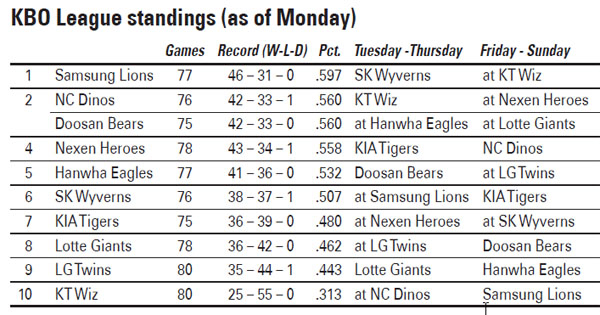 Better known as the “Super Match” because of its fierce rivalry, Seoul will be looking to revenge its embarrassing 5-1 defeat in their first encounter of the season in April.

The 5-1 loss tied the record for the highest goal differential between two teams since 1999.

Seoul has allowed only three goals in its last eight matches at home, best among 12 K-League Classic teams.

The problem is its offense, which has scored only eight goals at Seoul World Cup Stadium. In the upcoming match, striker Park Chu-young’s performance will be critical.

Suwon has the best win-loss record in away matches, collecting four wins, three draws and one loss. It is the league’s top offensive team, scoring 28 goals of which half were at away matches.

Midfielder Yeom Ki-hun, the league’s No. 2 scorer and top player in assists, has been leading in attacking, while striker Santos has also been gearing up with four goals in the last two matches.

However, the team has allowed 10 goals in eight away matches. The absence of two central midfielders - Kim Eun-seon and Oh Jang-eun - will be a problem for Suwon.

Jang Ha-na, who is sponsored by BC Card, has also returned from the United States for the first time in four months for the event.

In the first round, Cho Yoon-ji, Jang Soo-hwa and Nam So-yeon are sharing the lead at 5-under 67.

Entering its third year, the Gunsan CC Open started with 156 golfers and offered a prize of 100 million. The admission is free for this event.

The first round leader is Kim Jun-sung who shot 6-under 66 to lead by a stroke.