In uncertain economy, cash is king

In uncertain economy, cash is king 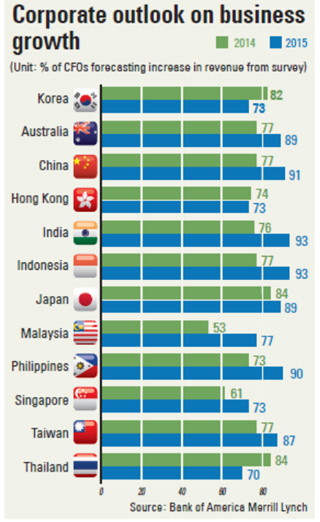 Korean companies are expected to invest conservatively this year, instead increasing cash reserves amid expectations that the national economy will lose momentum, a survey showed Thursday.

According to a survey conducted by Bank of America Merrill Lynch of the chief financial officers from 630 companies in 12 Asian countries, the Korean companies were much more pessimistic about their own business environment in the second half than their regional neighbors.

“Korean corporates stand at a crossroads,” said Shin Jin-wook, head of Korea Corporate Banking at Bank of America Merrill Lynch, at a press conference held on Thursday in central Seoul. “Despite forecasts for stable overall mid-term growth, [growth] momentum has been weaker than expected with both the external environment and domestic outlook deteriorating.”

The survey also showed 73 percent of Korean companies expect their revenue to grow in 2015, lower than last year’s 82 percent. Korea and Thailand were the only two countries that reported a year-on-year decline in revenue growth outlook.

Even the Chinese private sector, which faced a slowdown in gross domestic product outlook as its government shifted its growth model from exports to domestic development, rolled out a positive outlook compared to last year.

The majority of Korean companies, 71 percent of survey participants, said they will choose to stack surplus cash in reserves. In 2014, just 15 percent reported plans to do so.

In contrast, companies from 12 other Asian countries were more interested in mergers and acquisitions this year as a means of investment and way to expand their corporations.

But the popularity of Korean companies as M&A candidates dropped year-on-year. Out of Asian 12 countries, Korea was the 6th most attractive M&A target, two ranks lower than last year.