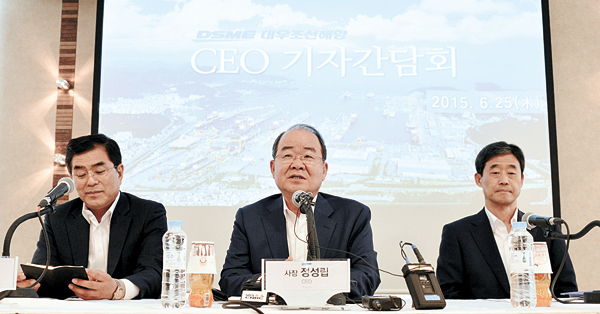 Jung Sung-leep, the new CEO of Daewoo Shipbuilding and Marine Engineering (DSME), revealed restructuring plans to overcome challenges in the business for the first time since he took the wheel of the nation’s third-largest shipbuilder in May.

In a press conference at the company’s headquarters in Jung District, central Seoul, on Thursday, Jung declared that the company will focus on improving its competitiveness in the cargo ship business and said it will not acquire STX France, a shipbuilder specializing in cruise ships.

The acquisition of STX France was considered the most significant issue for the new CEO, since the company’s labor union has strongly opposed it. It was proposed by the company’s No. 1 shareholder, Korea Development Bank (KDB), which has been restructuring the STX Group.

KDB owns a 66.66 percent stake of STX France while the French government owns the rest. The state-run bank has been trying to sell its stake as part of the restructuring of STX over the past five months.

“I have visited STX France and I saw that the company was financially stable and has a more advanced shipyard than DSME,” said Jung. “They were making profits and already have orders to work on until 2020. But we tentatively decided to not take over the company, since we need to focus on our core businesses to improve our financials.”

But Jung said Korean shipbuilders should consider the cruise ship business in the future, indicating that the company might go into the business later.

“It will only cost about 30 billion won ($2.7 million) to acquire STX France, but we have put this issue behind us because the government, financial institutes and even the media consider the acquisition a bad move,” Jung said. “The cruise business is currently led by Western countries, but I think it will be an important industry in Asia in five to 10 years.”

Jung also gave ideas about the company’s performance for the second quarter, which will be announced next month. He said there was a high possibility for a loss in the quarter because of red ink in the offshore plant business.

But in the first quarter of this year it had a 170 billion won net loss.