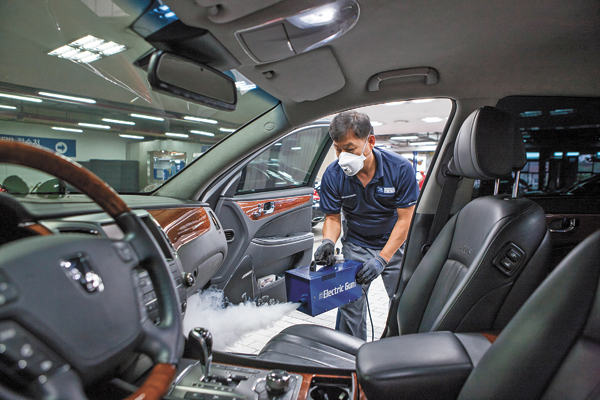 To combat shrinking domestic demand in the wake of the Middle East respiratory syndrome (MERS) outbreak, the country’s largest business lobbying group Thursday called on the government to lower individual consumption taxes on some items.

The demand was part of a set of recommendations the Federation of Korean Industries (FKI) released in a bid to fuel domestic demand.

Individual consumption taxes are levied on what the government considers luxury goods including vehicles, jewelry and furs.

Among those taxes, the FKI called attention to the 5 percent consumption tax on purchases of cars with engine capacities of more than 2 liters.

“Personal cars are now a common commodity as more than 20 million cars were registered as of 2014, 71 times higher than in 1977 when only 280,000 vehicles were registered,” the group said in a statement. “Cutting taxes on cars could play an important role in revitalizing consumption.”

The federation said consumption taxes on jewelry, fur clothing and expensive health supplements such as deer antlers and royal jelly from beehives should be removed.

“Products such as fur and jewelry are no longer goods that the government should discourage people from buying,” it said. “Not only is the tax revenue generated from those items meager, but much of the taxation is imposed on products produced in Korea.”

“The cancellation of the taxes, therefore, would have positive effects on the growth of the domestic market.”

The federation suggested a temporary increase in tax deductions for credit card users to encourage spending.

Other recommendations included lifting restrictions on entertainment expenses a company can claim.

“The average propensity to consume hit a record low since 2003 in the first quarter,” said Hong Seong-il, head of the finance division at FKI.

“To ease the slump in domestic demand, we need to fix tax policy, at least for the time being.”

Meanwhile, some industrial players devised their own ways to support those infected by the deadly virus.

SK Group announced Thursday it will encourage its workers to donate blood by installing a blood donation booth near SK affiliates’ offices across the region.

When an SK worker participates in the event, a gift certificate that can be used at traditional open-air markets will be given to people infected with MERS and their families.

Because of the fear of catching MERS at a hospital, the number of people donating blood has significantly dropped.

Hyundai Motor also came up with measures to help the country minimize the impact of MERS.

The automobile company will offer free antibacterial treatment for any driver no matter what brand of car he or she drives.

The service will be available at Hyundai Motor service centers around the country until July 17.