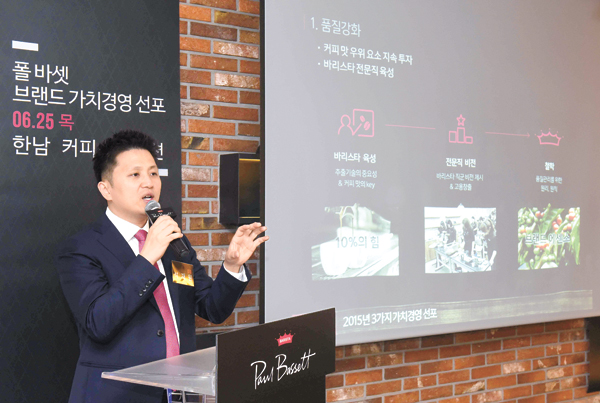 
Paul Bassett, a specialty coffeehouse operated by Maeil Dairy, announced plans to cut prices of its coffee drinks Thursday and open 11 more stores this year in a bid to strengthen its position in the crowded Korean market.

Paul Bassett will lower prices of its key line of coffee drinks by an average 8 percent and slash the prices of its coffee beans by 14 percent.

The chain also plans to increase the number of its stores to 200 by the year 2020. For this year, it aims to expand its store count to 70 from the current 59. The 59th store was opened on Thursday in Hannam-dong.

“We have decided that simply increasing the number of our stores will not help grow the overall size of our [specialty coffee] market,” said Seok Jae-won, CEO of M’s Seed, which operates Paul Bassett.

“So we decided to increase our store count and cut prices at the same time,” Seok added.

Despite its belated entry into Korean market - its first store opened at Shinsegae’s Gangnam branch in 2009 - Paul Bassett has been steadily growing and winning more local consumers on the quality of its coffee and the larger amount of coffee beans used to make its drinks.

Paul Bassett uses 25 (0.9 ounces) to 28 grams of coffee beans per drink compared with an average of 8 to 15 grams at other franchises.

In 2014, Paul Bassett generated 27.4 billion won in sales, up 57.5 percent from the previous year’s 17.4 billion won. The company said it expected its sales to top 51 billion won this year. That would make year-on-year sales growth 86 percent.

Korea’s coffeehouse market has been ruled by bigger giants like Starbucks and Coffee Bean & Tea Leaf. It is also crowded with local brands like Angel-in-Us Coffee, operated by the retail giant Lotte, and Hollys Coffee.

But growth opportunities may still be ample. Korea is a country of coffee lovers. An average Korean drinks coffee 12.3 times a week, more often than they eat kimchi (11.8 times) or plain rice (seven times), according to recent data by Korea Agro-Fisheries and Food Trade Corporation.