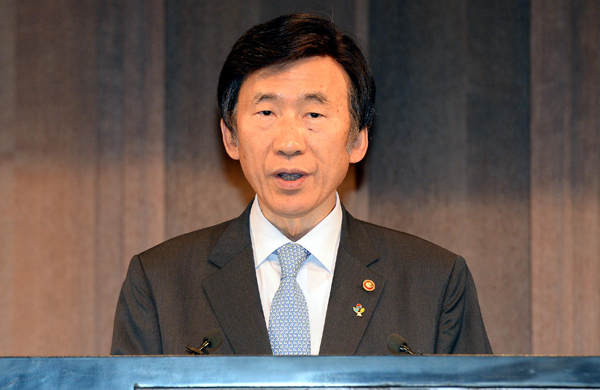 Minister of Foreign Affairs Yun Byung-se underscored in an interview Thursday that resolving the issue of the Imperial Japanese Army’s coercion of young women into sexual slavery during World War II is the most urgent task to normalize Korea-Japan relations.

He added that Prime Minister Shinzo Abe’s upcoming address in August could be a “golden opportunity” to improve bilateral ties.

“The issue of sexual slavery at the hands of the Japanese military is the most urgent,” Yun told Yonhap News Agency on Thursday. “The measures that come forth will have to answer the expectations of the victims and international society, and the Japanese government knows this well.”

He said that the “time and phase has come for the two sides to intensify efforts to resolve pending issues and speed up the improvement in bilateral relations.”

“The most important aspect in resolving the issue is healing the hearts of the victims,” said Korea’s foreign minister, who visited Tokyo on Sunday for talks with Fumio Kishida, his Japanese counterpart. “In this context, diplomatic efforts will be enforced until the end.”

It was his first visit to the country since taking office due to frosty bilateral relations over historical issues. On Monday, the two countries marked the 50th anniversary of the signing of the 1965 Korea-Japan Treaty on Basic Relations.

“There is intention from both Korea and Japan to finalize this issue this year on the 50th anniversary of the normalization of bilateral ties,” Yun said.

However, relations between Seoul and Tokyo largely depend on what extent Prime Minister Abe will address or potentially apologize for Japan’s wartime aggressions in an upcoming statement in August for the 70th anniversary of the end of World War II.

There is “consensus that the format and content of Prime Minister Abe’s address should meet the expectations of neighboring countries and the international community,” he said. “In such a case, the statement will become a golden opportunity for improving bilateral relations.”

Abe’s statement is coming along and expected to be finalized in early August rather than on Aug. 15, according to Japanese media reports. It will also likely reflect his personal beliefs.

Within Abe’s cabinet are officials from the Liberal Democratic Party’s junior ruling coalition partner, the Komeito Party, and other media reports speculated that in order for the prime minister’s statement to be approved, it would require adjustments in line with suggestions by the Komeito.

Some Komeito lawmakers have urged Abe to use phrases such as “heartfelt apology” and “aggression and colonial rule” in the statement.

The Mainichi Shimbun continued that it is likely that he will decide to issue a prime ministerial statement without cabinet approval, “in order to reflect his own thoughts.”

The international community is closely monitoring how Abe will approach his address, especially in light of past speeches, including that before the U.S Congress in April, when he referred to the wartime sexual slavery issue as a “human trafficking” issue, without specifying who was responsible.

While Abe has stated that he will uphold the apologies of past Japanese prime ministers, he has avoided repeating their exact wording.

Former Prime Minister Tomiichi Murayama urged Abe in a speech Wednesday in Osaka to obtain cabinet approval for the statement he will issue on the 70th anniversary of Japan’s surrender in World War II, Kyodo News reported.

Murayama’s landmark 1995 apology for Japan’s wartime aggression and colonial rule over Korea was cabinet-endorsed ahead of the 50th anniversary of Japan’s surrender.

On Thursday, UN High Commissioner for Human Rights Zeid Ra’ad Al Hussein delivered a press conference in Seoul, part of his first visit to Asia since taking the post.

Of all the people he met during his visit, “the three who impressed me most were the three women I met yesterday - Kim Bok-dong, Gil Won-ok, and Lee Yong-soo,” he said.

“Their personal stories broke through the impersonal nature of the historical arguments about the tens of thousands of so-called ‘comfort women’ forced into sexual slavery by occupying Japanese forces during World War II,” he said. “In the final analysis, it is only the victims who can decide whether enough has been done, and it was clear from my conversation with them, that these three remarkable women do not think that is the case. I firmly believe and hope that a satisfactory solution can be found.”