How TK Group squeezed me out

How TK Group squeezed me out

Kim Sung-kon, with a mustache, has a meeting with three other members of the so-called four-member group, which made an effort to diminish Kim Jong-pil’s influence. Starting from Kim’s right is Kim Jin-man; Gil Jae-ho and Baek Nam-uck. [JoongAng Photo]

While I was in self-imposed exile overseas to get away from the internal struggle for power, the Korean political landscape went through some transformations. People with backgrounds in Daegu and North Gyeongsang formed a group called the TK Group and began claiming important positions within the military government. When I returned to Korea and the world of politics at the end of 1965 as the head of the Democratic Republican Party (DRP), four men had a tight grip on the management of the party: Kim Sung-kon, Baek Nam-uck, Gil Jae-ho and Kim Jin-man. Of the four, Kim Sung-kon was the leader of the so-called four-member group. Kim was the founder of the now-defunct Ssangyong Group that was the country’s fifth largest conglomerate by assets in the 1980s.

There is a back story as to how Kim joined the DRP. Just days after we carried out the May 16 revolution [coup] in 1961, Kim, who was running a textile manufacturing company, paid me a visit at my office at the Korean Central Intelligence Agency (KCIA). I had never met him before although I knew his name. Out of the blue, he said he had an urgent issue that he needed me to handle. He said he had a record of involvement with a leftist group in Daegu that was responsible for a riot against the authorities in 1946. Sensing his group had done something really serious, he fled the city to Seoul, where he became a successful businessman running his textile factory.

“Can you erase my record using your power as the head of the KCIA?” he asked.

I asked him how I was supposed to do such a thing. 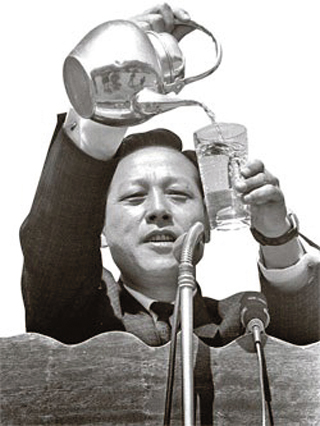 Kim Jong-pil campaigns for President Park Chung Hee on April 3, 1967 for Park’s second-term at a school in South Chungcheong. Kim pours water to make the point that the people would be flooded with welfare policies under Park’s growth policies. Provided by Kim Jong-pil

“You could order the security apparatus to bring you my record,” Kim replied. “And once you have it, you could just forget to send it back.”

“What can you do for us in return?” I asked.

He spoke without hesitation: “I will commit myself to Chairman Park Chung Hee until my dying breath. I can cut my finger right here and now and write an oath of my loyalty to him in my blood.”

The man was clearly desperate to cleanse his record and I concluded he would serve Park in earnest as promised. I told him I would do as he asked.

I destroyed the paper record of his leftist affiliation. But I left intact the microfilm record of his past at the security apparatus office. Kim did not know about it.

Keeping his grand promise, Kim poured time and energy into the founding and running of the DRP. He soon formed a close circle with those who came from Daegu and surrounding areas in North Gyeongsang. They had a high level of loyalty to Park as he also came from North Gyeongsang. The four-member group did not waste any time suppressing other groups that attempted to take some control of the party.

With Kim’s vast fortune, the so-called “TK Group” began attracting Park’s attention. It was the beginning of the rise of the TK Group in Korean politics (TK refers to the first letter of Taegu, the old name for Daegu, and Kyongbuk for North Gyeongsang).

While Park must have thought he was using them to build his political strength, to me it seemed like the TK Group was using Park for their political advantage. It also made efforts to sideline me from the center of politics. Influenced by the group, Gil Jae-ho, my longtime friend from the military academy, turned his back on me as did Kim Hyung-wook, the third chief of the KCIA.

In December 1965, internal strife erupted within the DRP over the election of the National Assembly Speaker. I had proposed Jung Gu-yeong and Park concurred. But a few days later, Park changed his mind and declared he would keep sitting Speaker Lee Hyo-sang. Park’s change of mind was the result of efforts from the TK Group members.

On Dec. 27, 1965, I was named chairman of the DRP, the No. 2 position after the party president. But due to persistent efforts to keep me in check by the four men, I could not exercise my powers as chairman. Kim Sung-kon, the de-facto leader of the TK Group, was in charge of the party’s financial management and Gil Jae-ho, who by that time had already turned on me, was appointed party secretary general. Baek Nam-uck was a policy director. They were determined to limit my ability as a policymaker.

My diminished position within the party was illustrated during the campaign for Park Chung Hee’s reelection in 1967. When I went on the stump to give speeches, I was always sent to small cities that Park did not go to. The TK Group made sure that I was excluded from campaign stops with Park in major cities.

On April 16, 1967 I was able to campaign with Park for the first time, but only because we were in Daejeon, where I hail from. Impressed with my speech, Park ordered that I accompany him on major campaign events.

The four-member group made every effort to strip me of political opportunities. My campaign team was given less money than other teams. But I didn’t say a single thing against them. I just kept working to win votes for Park.

In retrospect, it was me who had drawn Kim Sung-kon into the center of politics. At the end of the day, I had brought this upon myself. I knew that he was a man of ambition, but I didn’t foresee that he would become my nemesis. But you can’t blame someone for changing his mind. It is in the nature of human beings.