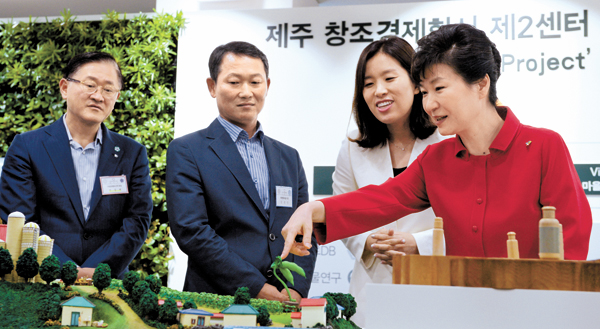 At the Jeju center, which will consist of two locations, the IT and cosmetics companies hope to create a Korean version of Silicon Beach, an IT business hub near Los Angeles where nearly 370,000 start-ups and IT giants Google, Facebook and Microsoft are located.

DaumKakao, which has its headquarters in Jeju, and AmorePacific, which has green tea and related culture and tourism businesses there, hope to create a similar environment in Jeju together, where software, beauty and tourism industries coexist and create synergy by cooperation.

“Nowadays, Jeju is not just a tourist place, but a place for creation and innovation for entrepreneurs and artist migrants,” said Park, “as many software and IT companies are moving their headquarters here.”

Park mentioned that Jeju welcomed 12.3 million tourists last year, more than popular vacation destinations like Hawaii and Bali, but Jeju businessmen have seen profits decline due to excessive competition because of a flood of new businesses. She added that enhancing quality for tourism is essential.

AmorePacific will operate a separate innovation center in Seogwipo, southern Jeju, scheduled to open in September with a focus on cosmetics and green tea tourism industries. The company will assist with research for start-up businesses related to cosmetics and tea, and jointly launch tourism programs with them.

DaumKakao offers its global IT and content creator networks as well as start-up assistance groups, including Tencent of China, Global Brain of Japan and Appota of Vietnam, via joint business projects and human resource exchange programs.

Through such initiatives, the Jeju Creative Economy Innovation Center will be a control tower for integrated business projects, such as utilizing beacons - transmitters that interact with smartphones via Bluetooth and provide information services - at major tourist spots and allowing start-ups to develop mobile tourism information apps that interact with the beacons.